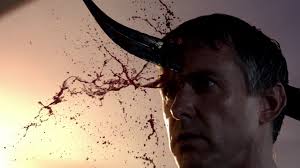 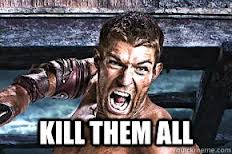 While the Spartacus series had its fair share of action outside of the arena, there’s no denying that like Batiatus, Crixus, and the gladiators of “Good” Solonius work best in the glory of the arena. The set piece battles, the crowd getting worked into a frenzy (especially the women), the slow motion, the helmets, and yes, the ridiculous amounts of gore. We love it! Sadly, as the show drew to its conclusion there was less arena action and more set piece battles out in the field, and leading to the inevitable and sad conclusion. But like Gannicus as he is nailed to the cross in the last ever episode, remember back to the days of glory- they were and will forever be the Gods of the Arena.

Ok, so it wasn’t a Roman-built arena and a bit make-shift, but it had seating, ex-gladiators fighting, and plenty of action.

Spartacus is the first to fight, and his first opponent is one of Tiberius’ bodyguards. He seems more capable then the other captured Romans, but when Spartacus faces the crowd, the soldiers tosses his sword to the ground, shouting “I am a Roman! I will not fight for your fucking entertainment!”.  Spartacus cuts his throat, warning all other Romans to fight or die. They fight (and die).

At the newly built Capua arena. He makes very short shrift of these two with twin decapitations. For a little feller, Ganny was a great little Gladdy mate, even if his Oz accent kept breaking thru at times, orright Bruce? 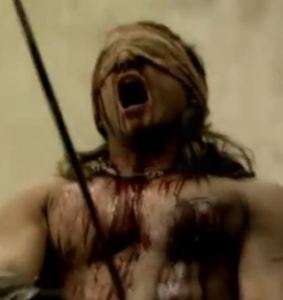 This was the fight in a makeshift arena in a street of Capua.  Vettius brings forth his gladiator, Otho, along with a blindfold, reminding Batiatus of his words “My man could beat him blindfolded” —despite that they were only spoken in jest.  Gannicus steps forth to accept the blindfold, and readies for the fight. Gannicus is successful at the start as Otho begins his every attack with an angry cry; thus, he can use his ears. The two gladiators wrestle around without weapons, but once they are free of one another’s hold, Gannicus cannot find his opponent and is beaten to the ground. Otho lands many hits and eventually grabs his sword again. He slashes Gannicus’ chest, but the latter grabs him and forces the sword out of his grip. Otho pulls a nail from nearby and with it stabs Gannicus in the chest again; Gannicus pushes him off. Sword in hand, Otho moves in and slashes at Gannicus, who dodges at the last moment. The sword becomes embedded into a wooden plank. Gannicus grabs Otho and forces him down onto the edge of the sword, cutting his neck open and killing him. A particularly nasty and brutish little scrap in the street! 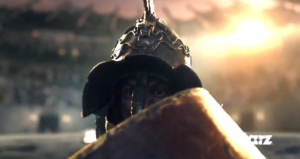 Crixus faces Pericles The Titan of Pompeii in the Primus. Pericles is an average height gladiator with dark skin and long dreadlocks. He is covered in what appears to be tattooed markings around his face and body. He has a lean muscular body type suited for his fighting style, that of the thraex. As befits his gladiator class, he uses a sica and shield, though does not cover his face with a helmet.

At the beginning of the bout between Crixus and Pericles, the two test each other’s strengths and weaknesses with Pericles getting the edge very quickly over Crixus using his superior speed and strength against him. However Crixus is just too experienced and he disarms Pericles and disembowels him. 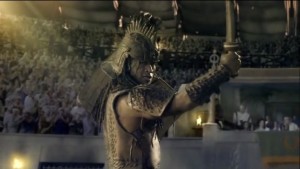 As his guts begin to pour out of his sliced stomach, Crixus kicks Pericles face down to the sands and crushes Pericles’ skull with his foot, gruesomely killing the ‘Titan of Pompeii’ and reclaiming glory he lost when he was (almost) defeated by Theokoles.

At night, with a ring of fire to keep the two teams of Gladiators fighting, this was a massive spectacle. Seven gladiators are from the House of Batiatus (among them Gannicus, Ashur, Dagan, Gnaeus, Crixus) and thirteen from the House of Solonius (with Caburus). When they reach the centre, slaves enter and encircle them all within a ring of oil which is then lit aflame. The rules are set: the gladiators are out of the fight if they die or are cast out of the ring. The last one standing will be declared champion.

The men attack and the arena becomes a scene of bloodshed as the gladiators fall one by one, mainly those of Solonius. Dagan sees a chance to have vengeance on Ashur, and attacks him in spite. From the stands, Solonius mocks Batiatus that his gladiators are not trained well enough to not attack their own men. Ashur eventually gains the upper hand and slays Dagan, killing him with a sword through the stomach. Gnaeus is knocked outside of the ring and is disqualified. 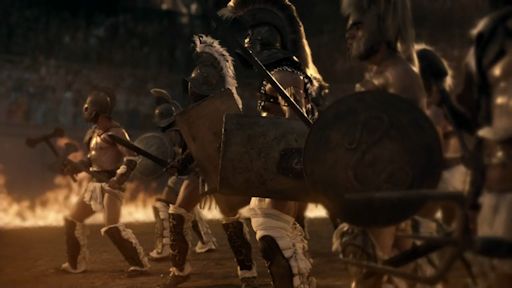 Crixus, Ashur, and Gannicus remain to fight against Caburus and the remainder of Solonius’ men. Ashur approaches Crixus and conspires against Gannicus, saying that together they can kill him so that they alone can fight for the title of champion. Wanting to fight Gannicus himself, Crixus slashes Ashur’s leg to the bone before tossing him out of the ring. Crixus and Gannicus are left to fight Caburus, a giant in comparison to the two of them. During the battle, Crixus is knocked out of the ring and loses his chance of becoming champion. Just as Caburus appears to have the greater advantage over Gannicus, the Celt fights back at the last moment, piercing Caburus through the mouth and ripping out his jaw.

Gannicus’ victory is taken well by the crowd, who chant for the man’s freedom. Solonius, seeing a way to safely remove Batiatus’ champion, suggests that Gannicus be freed. Although internally outraged, Batiatus succumbs to the crowd’s wishes, and the magistrate grants Gannicus his freedom.

5. Spartacus vs Ixus (The Thing from the Pit) 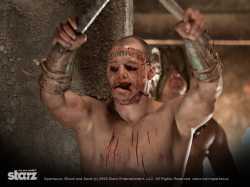 The pit is the underground arena where the lowest of the low drink, whore and bet on the no-rules combat duels. After Spartacus’ loss to Crixus, Batiatus sent him, along with fellow disgraced gladiator, Kerza, to the The Pit in order to make some money with them, as they have lost the crowd’s favour and are no longer worthy of fighting in the arena.
The first to fight is Kerza against Ixion. Ixion kills him by hitting him with a sledgehammer several times in the head, before cutting off his face, to have a fresher face mask later. Next Ixion – now wearing Kerza’s face as a mask, is scheduled to fight Spartacus, who already gained some wins in The Pit. 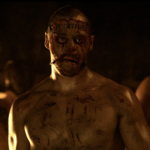 Spartacus kills Ixion in desperation as he witnesses a man about to assassinate Batiatus; knowing that Batiatus’ death would destroy any chance of seeing his wife, Sura again. Spartacus proceeds to kill the assassin as well.

At the Vulcanalia, Spartacus embarrasses his owners publicly, both by beginning to fight too early, and by surrendering instead of dying. It’s off to the pits with him!  By the way Crixus means “one with curly hair”. Another fact: The festival of Vulcan, the Vulcanalia, was celebrated on August 23rd each year, when the summer heat placed crops and granaries most at risk of burning. During the festival bonfires were created in honour of the god, into which live fish or small animals were thrown as a sacrifice, to be consumed in the place of humans. Oh yes, and some gladiatorial arena games.

In truth this is the most one-sided fight ever seen in the Spartacus series. But Batiatus’ hated enemy Solonius who has been caught in a deadly sting operation and sentenced to die in the arena, actually puts up a good show. But he is fighting the best. The Bringer of Rain. The Slayer of the Shadow of Death. It’s actually quite sad to see Solonius bow out as he was such a good character- arrogant, sleazy, pompous, scheming, and until this point, the person who always got the better of Batiatus. It’s a turning point in Batiatus’ perceived fortunes and so is a crucial point in series One. He also loses his head in a spectacular fashion!

The first season finale. While Crixus and Spartacus had had scraps before, this was the one that led to the blood bath that saw Batiatus and a host of other Romans sent to the after-life. This took place in Batiatus’ Ludus training arena. Using Crixus’ shield he repeated a manoeuvre that they used against Theokoles in the arena. It only remains for me to say the phrase “Kill them all” and then let slip the dogs of war and let the blood-letting begin. Cue some 20 minutes of hack and slash with TV audiences cheering on, especially as Onamaus joins in. Wha-hey.

1. Spartacus and Crixus vs Theokoles, the Shadow of Death. 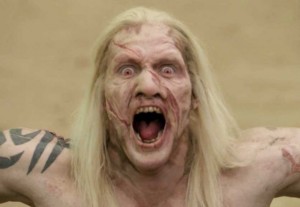 This was the biggy. The one where Crixus got pretty mauled up, and Spartacus got the tag “Bringer of Rain”. Theokoles was the big albino red-eyed brute that defeated Batiatus’ Dotore, Oenomaus. But here he faces up to a shackled Crixus and Spartacus. It is, simply, superb!