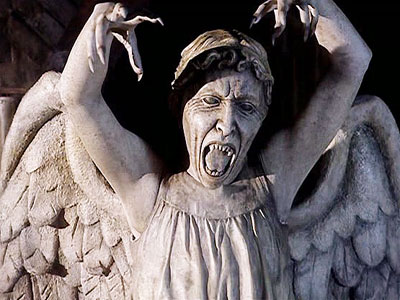 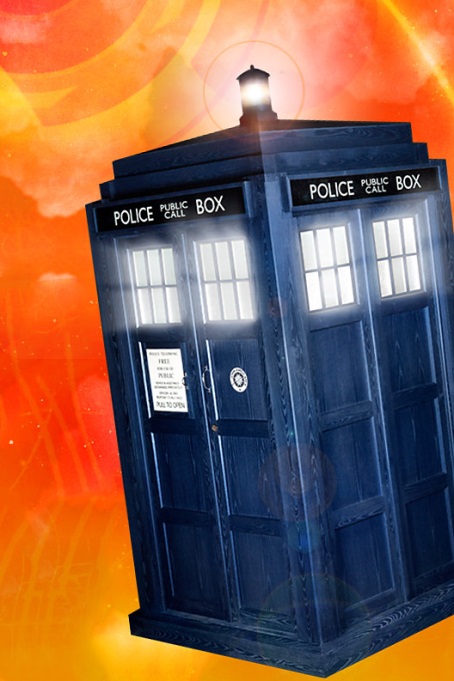 I am so old that I remember seeing the very first Dr Who on black and white BBC television in 1963. I was 8, and not scared at all as I cowered behind the settee. I was just looking for a lost fruit gum, Mum. In fact I was more frightened by the appalling cardboard sets, crappy acting and paper thin storylines in those days. The only saving grace was the wonderful theme tune, composed by Ron Grainer of the BBC Radiophonic workshop.This was half a decade before Robert Moog started working on his seminal Series One colossus synthesiser, and so the intrepid radiophonic workshoppers welded transistors, valves, resistors, potentiometers and the like to create the first truly authentic electronic sounds since the theramin.

Thankfully Dr Who got better and better as more money was injected into the series, and with the advent of CGI, there was no more need for small boys to be paid sixpence to crawl inside a Dalek, or for out-of-work actors to have avoid “resting” by donning horrendously sweat-making rubber and hair Yeti outfits and waddle through the London Underground making growling sounds. 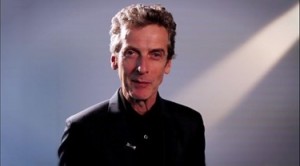 Monsters in Dr Who. There have been lots of them. Over 500 races/species in fact. Some scary, some stupid, some good, most bad, and all ultimately thwarted by the Time Lord from Gallifrey. There have been twelve incarnations of the Doctor, the latest having just been announced, Peter Capaldi, the sweary neurotic minister in the UK political series The Thick of It. Should be interesting. But as some groups are quick to point out, there has never been a female Doctor, nor anyone with any ethnicity. And no-one from another planet. Plenty of Scotsmen though. 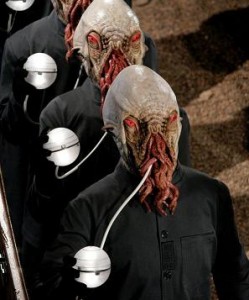 Enough already, time to get this Tardis on the road. Here are the top ten most evil and villainous, muthas in the known multiverse. While the Ood (shown right) look scary they’re actually goodies (well, most of them…) 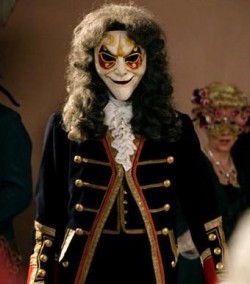 Looking like Jacobite Jack-in-the-Boxes, here are Clockwork Droids that made an appearance in David Tennant’s first series as the Doctor. They were robots working for a ship sometime in the future. When the ship started to fail, their method of repair was to kill all the crewmembers and replace all broken machinery with body parts. One of the cameras was a human eye. Sort of like 2001’s Hal 9000 computer with attitude. 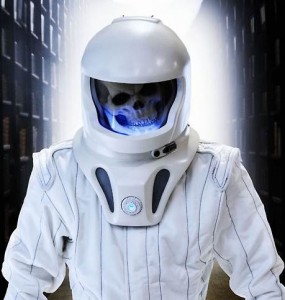 The name means the shadows that melt the flesh. They are microscopic swarm creatures which, when present in a high enough concentration, are totally indistinguishable from shadows, and use this to their advantage in approaching and attacking prey. They are described as the “piranhas of the air”, able to strip their victims to the bone in an instant in high enough densities.

Straw-filled foot soldiers created by Son of Mine, using molecular fringe animation. They were relentless and untiring, with rudimentary intelligence. Even after being cut down by machine-gun fire, they could be reanimated. Always had a thing about scarecrows coming to life in fields after the sun goes down. That’s why I never took to camping. 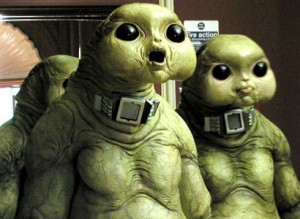 They’re fat, they’re green, and they fart a lot. They kill fat people and steal their skin. They’ve tried at least twice to blow up the Earth and sell it for scrap. And they have scratchy voices- give them some cough syrup someone!

They are not mindless killers, but a sort of intergalactic Cosa Nostra that want to make a killing on the stock market, buying and selling planets. 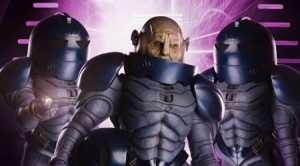 The Sontarans are a totally militaristic race who have battled for centuries in a seemingly endless war with the Rutans. In fact there are shades of Orwell’s 1984 here. They love war so much that they have to balance the battles to make sure they neither win nor lose. 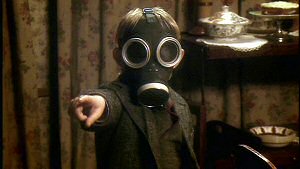 “Are you my mummy?” it still sends a shiver down your spine. A little kid with a gas mask permanently stuck to his face, asking for his mother, was scary enough. But the fact that it could infect other people, even making an old man chant “Are you my mummy?” moved this monster into nightmare territory, as more and more gas masks popped out from people’s faces like blown up balloons 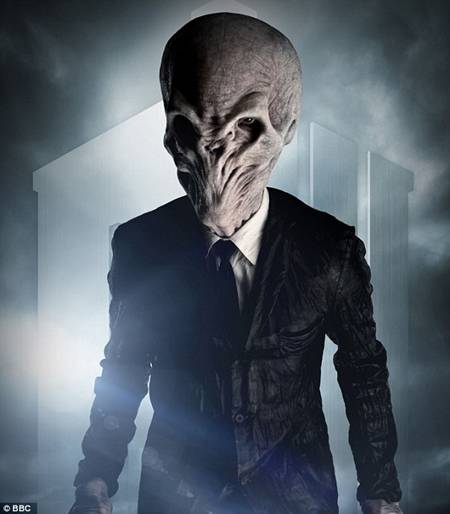 The Silence are a religious order who are intent on killing the Doctor to prevent him answering the oldest question in the universe.  They believe silence must fall when this question is asked and have made a number attempts to destroy the Doctor, including rigging his TARDIS to explode.

They have the chilling ability of only being remembered when they are seen. This means as soon as you look away or turn your back, all knowledge of their existence is forgotten. And somehow their horrible visages and warped bodies look even more evil with a smart suit and tie. The Sartorial Silence remind me a little of the cracked creature screaming “I want your soul!!” in Aphex Twin’s music video Come to Daddy. 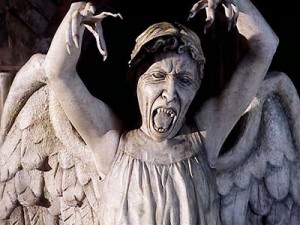 The Weeping Angels are everyday statues who become evil killing monsters; you die if you

c) look them in the eye.

They are very intelligent, but have a purpose as inscrutable as a tombstone epitaph in Sanskrit. You defeat them by.. err.. running away, and avoiding graveyards. These should probably be number one, but I have a certain misguided loyalty to the next two races- 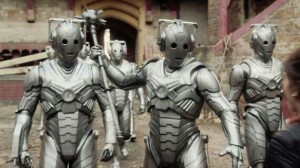 Ok Ok.. I know they have become gay icons, but unlike the Daleks (who have a creature inside them, the Kaled) these are pure cyborg robotic rottenness, right down to their vicious valves and cruel CPUs. And they come in the best colour, metallic silver. No need to be going to a car wash every week after seven days of enslavement activity. The only time they can be defeated is when their batteries run out. Or they have a sonic screwdriver inserted where the sun don’t shine. The Cybermen are from Earth’s parallel/twin planet Mondas. The Cybermen began experimenting with cybernetic parts in order to survive, eventually all their emotions were removed and they became less and less human. 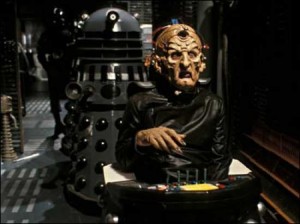 Of course. The Doctor’s oldest enemy. Who else? Appearing in the second outing of Dr Who in 1964, in two films, and countless subsequent episodes over the decades, these callous creatures who originated from Skaro have proved the trickiest of all the Doctor’s baddies to beat. Originally conceived by Terry Nation over a meal in a Wimpy Bar in London, and inspired by the sugar shaker on the table, they only needed a sink plunger and a death ray to complete the transformation from condiment to creature of cruel contempt for the human race.. and all other races in fact. Global domination has always been their sole aim. 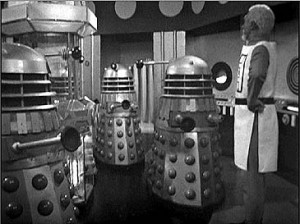 You’ve got to admire them for their single-mindedness and dedication to extermination of everyone and everything. I wonder what they do in their spare time? Poor old Davros, the scientist in the electro wheelchair with the haunted look and worry marks on his brow was the one who first put his fellow Kaleds into their metal skins. If you don’t agree that the Daleks should be Number 1 on this list, then I am afraid I shall have to exterminate you. Exterminate! Exterminate! You have been warned!

Top 10 Characters from Band of Brothers & The Pacific