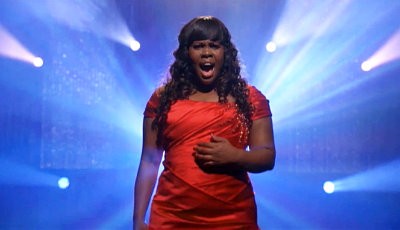 Heather Morris, made her singing debut in this episode, and it is favorite number from the Britney Spears extravaganza. It is sung by Brittany in a dream sequence while she was at the dentist. During the number, Brittany is seen singing in many Britney Spears-like costumes, and the theatrics coming from Brittany S. Pearce gives Britney Spears a run for her money. 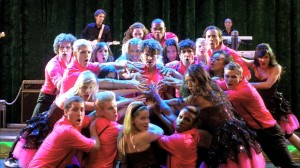 Vocal Adrenaline, led by Jesse St. James, delivers their performance at the 2010 Midwest Regional Championship. The number is intertwined with the birth of Quinn’s baby, Beth, by mixing some lyrics with Quinn’s pain. It is one of the few songs to be performed for the recording length (aside from the mash-up songs). Their performance earned them first place in the Regionals competition. 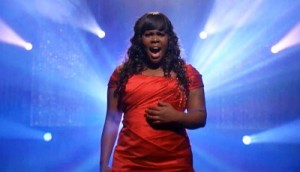 Before the song, she is talking to Sam in front of her locker, explaining that she had told Shane about them. Sam automatically assumes that now they can be together. However, feeling awful about what she did, Mercedes tells Sam that even though she loves him, they can’t be together, and she then starts to sing at her locker. During the song, she moves into the auditorium wearing a red dress and singing only to Sam, and then towards the end of the song she sings in front of the Glee Club. After the performance, Sam leaves the choir room with tears in his eyes. 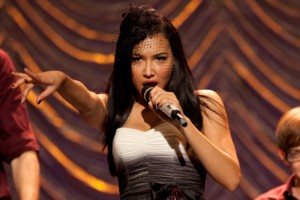 This is a great remake sung at the 2010 Western Ohio Sectional Championships by Santana with the New Directions as back-up. Additionally, Brittany and Mike have an effortless and extremely talented dance during the song. This competition performance really gave viewers a chance to see other Glee Club members in the limelight. 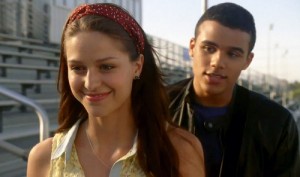 Jake and Marley hang out in the football field’s bleachers discussing things. Marley explains that it’s “Britney week” in Glee Club and Jake shakes his head, saying he only likes songs with “actual” instruments. He then plays his guitar and they start to sing. During the performance, they have playful moments, and singing cheerfully to each other. At the end, they are about to kiss, but Marley pulls back, saying it suddenly got cold. Jake gives her his jacket as she pulls a grin. 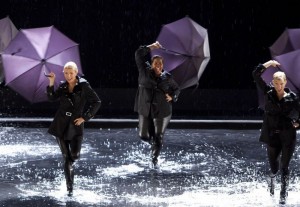 At the end of the episode, Will announces that the Glee Club will perform the song “Singin’ in the Rain” from the musical “Singin’ in the Rain.” Because the song is almost 50 years old, the club is upset because they want to sing more modern songs. Will goes to Holly and asks her what he can do to make the song more modern for the kids. They decide to mash it up with Rihanna’s Umbrella, ultimately creating one of the best mash-ups of the entire series.

The title of the song is a collaboration of words that the New Directions said during a brainstorm session, when talking about bad things Sue has done to them recently and how it made them feel.  Using these words, Will created the title ‘Loser Like Me.’ The song is about the members of the New Directions, how they have been bullied and treated like outcasts, but how they are using these experiences to rise above the others. The performance ends with the New Directions throwing red confetti slushies’ at the crowd, a parody of how they are often slushied. 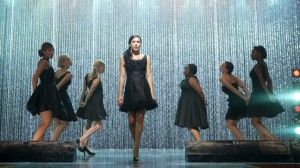 Sue is blaming Santana’s lesbianism for ruining her campaign and Santana leaves crying because she hasn’t even come out to her parents yet. This fuels the fire for the girls’ mash-off. Santana almost breaks down during the performance, while Brittany and Mercedes are seen tearing up, too. After the performance, Finn and Santana have a brief argument before she slaps him because he outed her earlier in the episode.

The performance ends one of the most heart wrenching episodes of the series. Most cast members break-up with their significant other and all culminate on the stage for the Scientist. Finn is the first to sing, followed in succession by Blaine, Santana, Kurt, Brittany, Will, Emma, and Rachel. Towards the end of the song, flashbacks appear: Finn and Rachel’s first kiss in Showmance, Kurt and Blaine holding hands as they stroll through Dalton Academy in Never Been Kissed, and Santana and Brittany smiling in the episode Heart. The flashbacks conclude with Will and Emma kissing at the end of the episode Sectionals. At the end of the song, the lights flash off and the camera zooms out, lights on Finn, revealing that he has been singing the song by himself. 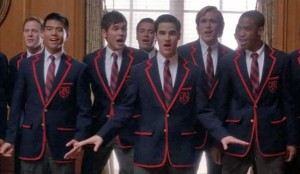 The introduction of new character Blaine provided the occasion for an all-male a capella version of Katy Perry’s hit single “Teenage Dream”. It is sung by the Dalton Academy Warblers with Blaine on lead. It is implied that Kurt began having a crush on Blaine while watching this performance.

This is the song that started it all. The New Directions perform this song in the school auditorium to show their unity as a group while Will watches them from afar. Little do they know, Puck, Sue, Quinn, and Santana are also watching them. Will decides to stay for the Glee Club, and viewers get a glimpse of future members. It is one of the show’s most prominent songs during Season One and has since become one of the series’ most recognizable songs.