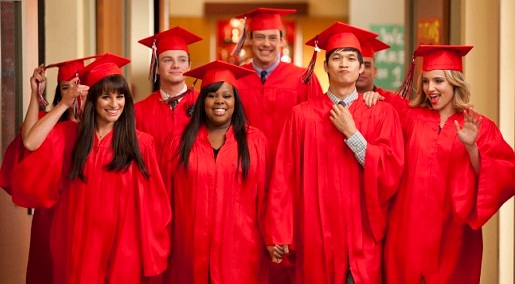 Sue proclaims her love for Madonna and how she inspires her, so she trains her Cherrios to begin imitating Madonna. Mr. Schuester challenged the group to choose a song from Madonna that emulates equality with a powerful message. He felt the girls in the group were being disrespected by the guys so he had hopes singing Madonna will help boost their confidence and strength and the guys will act right again. This entire episode is dedicated to overcoming those struggles, and seeing a modern performance on some of Madonna’s greatest hits. 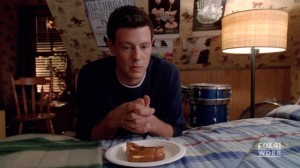 Finn has a crisis when he sees the face of Jesus in his grilled cheese which sets the precedent for a very controversial Glee episode. Then, members of Glee all question their beliefs and what religion means to them. This hits home for Kurt as his father is in a coma from a heart attack. Sue talks to Jean about God and reflects on her life choices and decisions. 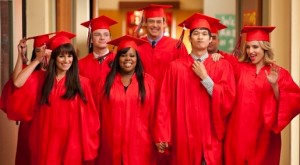 The school year is ending and the Glee club is looking back to reflect on their memories and high school years. Some will be graduating, and Will creates a final “Goodbye” assignment to give the seniors a real reflection. Rachel and Finn prepare to move to New York and also their wedding and we meet Santana’s mom as she goes to her for advice on her future. Quinn helps Puck prepare for his geography test which is means he will graduate or get held back. Kurt and Rachel receive their acceptable letters, as Finn receives his rejection and then makes a huge decision for his future. 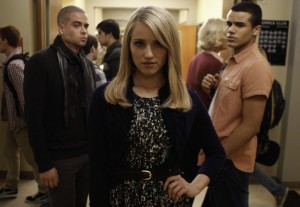 Santana, Mike, Quinn, Mercedes, and Puck all return back to McKinley for holiday break. To avoid drama, Rachel and Kurt decide to stay in New York, even though they made promises to each other to always return to McKinley on vacations. Finn trains the newbies by pairing each one up with alumni so they can be the best prepared for Sectionals against the Warblers. Kurt and Rachel have Thanksgiving with Isabelle and her friends, including Brody. Marley hasn’t been eating from an inner voice coming from Marley, and this has a huge impact on their shot at Sectionals. 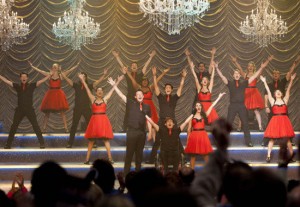 The group finally makes it to Nationals, but only faces many problems. Merecedes is sick with food poisoning, leaving Tina and Quinn to fill in. Rachel is performing her solo to Carmen Tibideaux, and also runs into Jesse St. James who is the new Vocal Adrenaline coach. Unique, a very “different” student becomes the MVP of Nationals as a member of Vocal Adrenaline, and the New Directions claim their National Title…one they have been seeking out since Season 1. 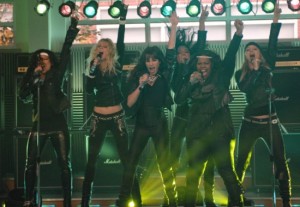 Will has the group compete in their second annual mash-up competition, and this year the boys must sing sounds by female artists and girls sing songs from male artists. Learning that Dalton Academy is the New Direction’s competition this year for Sectionals, Kurt leaves to go spy on them. Kurt meets Blaine and falls instantly in love. At the same time, Kurt has been dealing with endless bullying at school from Karofsky. Back at school, Coach Beiste learns the boys use her as a turn-off method, and tries to quit her job as she too, deals with endless bullying. 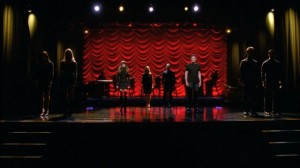 Feeling like he has no place in New York and questioning the relationship between Brody and Rachel, Finn sets out to unexpectedly visit Rachel. Blaine is also questioning him and Kurt’s relationship and joins Finn on a trip to New York. Santana is also feeling the same, and comes back to McKinley to visit Brittany as the long distance is taking a huge toll on them. Also, Will and Emma fight over Will’s new job in Washington D.C. Meanwhile, Kitty organizes rapture at Breadstix, after which Jake decides to break up with her. The episode ends with the cast singing a very emotional “The Scientist” back on McKinley High’s stage. 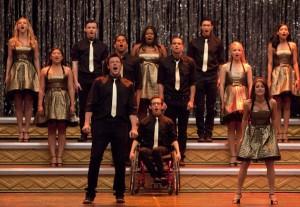 New Directions compete against Vocal Adrenaline and Aural Intensity at Regionals, in front of celebrity judges Olivia Newton-John, Josh Groban, Coach Sue, and Rod Remington. Sue compromises the Glee Club’s chances by sneakily becoming a judge. Quinn goes into labor immediately after their performance. Will professes his love for Emma, and Finn does the same to Rachel. 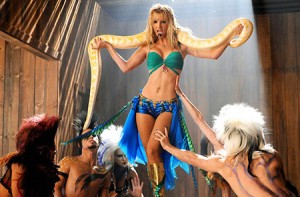 The New Directions are chosen to perform at the School Pep Assembly. Kurt requests Britney Spears but Will doesn’t like the idea. When Emma brings in her boyfriend dentist, Carl (John Stamos), to Glee Club, he finds out that some of the Glee Club members are not brushing enough. As he helps them with oral hygiene and puts them on anesthesia, they have Britney Spears fantasies. Britney Spears appears in some of the dream sequences, caused by anesthesia in the dentist’s office. We also learn that Brittany’s full name is Brittany S. Pearce. 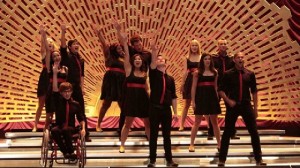 Sectionals are finally here for the Glee Club, but when Finn learns he is not the father of Quinn’s baby; the club may not be able to recover in time to compete. Since Will has been disqualified from the competition, Emma steps up and tells him that she will take the kids to Sectionals as the club’s faculty advisor even though her wedding is on the same day, and Will makes a potentially life-changing decision. Meanwhile, Sue’s scheming hits an all-time high as Jane Addams Academy and Haverbrook School for the Deaf perform the New Direction’s set list.