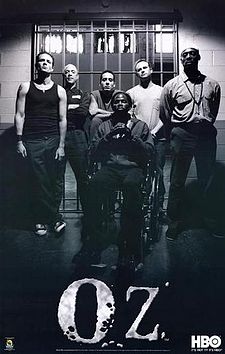 Oz, the violent, funny and sometimes moving Prison television drama series was created by Tom Fontana. He also wrote or co-wrote all of the series’ 56 episodes. It was the first one-hour dramatic television series to be produced by premium cable network HBO. Oz premièred on July 12, 1997 and ran for six seasons. The series finale aired February 23, 2003. It features a bunch of mostly bad-ass characters all trying to run various scams and rackets, usually involving drugs, while banged up in a maximum security institution. Inevitably most of the best characters are the inmates, but there are one or two others who give great characterisation. The interaction of the various gangs is a feature of the series, all jostling to be the top dogs; that’s the latinos, the Mafia, the Homies, the Irish, the Bikers, the White Supremacists, the Muslins, the trannies (transvestities), the Bible-Bashers- to name just a few!

Why Oz? “Oz” is the nickname for the Oswald State Correctional Facility, formerly Oswald State Penitentiary, the fictional maximum-security prison (level 4) in an unnamed US state.The nickname “Oz” is a reference to the classic film The Wizard of Oz, which is notable for popularizing the phrase: “There’s no place like home”.

Some of its episodes were fillers, but there was usually enough plot twists, violence, and bizarre episodes to keep you engaged. There were plenty of laugh out loud moments, particularly at the ridiculousness of the opening introductions (which got more and more crazy as the series progressed with inmates dressed up in costumes and mugging to the camera), and the points were people “lost it” big time. 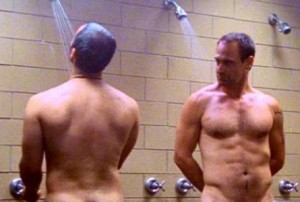 Did you know that Peter Dinklage, he now of Game of Thrones fame (as Tyrion, the Lannister imp) was in an episode? In a Head to head with The Sopranos, I guess Oz would always come off with a bloodied nose and a spell in solitary, but it’s not far behind in terms of quality acting, plots, black humour, and turn away nastiness (we’re talking immolation, anal impropriety, and face-dumping, as well as the usual hackings, slashing and beatings). It also became a must see for US’ gay community- just as Starz Spartacus series had a minimum booby count each episode, it seemed that as the series progressed, the Oz gratuitous cock count and shower scenes seemed to be erected to ridiculous proportions…

Ten years on, you should recall that for its time Oz was pretty ground-breaking. Not just in its graphic portrayal of violence, but in the honesty of the physical and spiritual relationships forged (and broken) between the prisoners. Oz never held back on issues of race or religion either and was one of the first shows to highlight the modern day issue of African-American Muslims honestly and openly. Likewise, Oz was as critical of its characters lifestyle choices as it was open about showing them and was quick to highlight the slippery slope many people find themselves on when they become part of the system. The insular security of Emerald City, the experimental unit within Oz, would drive many of us crazy. Having just watched the box set of all 6 series plus the extras, it is definitely well worth a return viewing. And if you didn’t catch it the first time round when aired, then go get it now (at great prices!) and settle down for a real treat. But best put the security chain on the door first.

Ps. I’ve tried not to put any big plot spoilers in here- but ending the riot by nuking the joint at the end was a tad OTT in my book.. 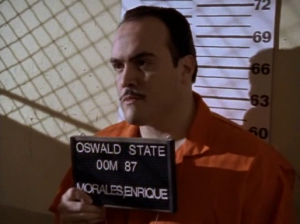 Morales is one of the most powerful Latinos in Oz, incarcerated for killing another man in a fight. On arriving in Oz, he assumes the position as the head of the Latino gang El Norte by having inmate Bob Rebadow kill the old leader Raoul “El Cid” Hernandez. In doing so, he becomes partners in the prison drug trade with Italians (known as the “Wiseguys”) led by Chucky Pancamo and the African American gang (known as the “Homeboys”) led by Simon Adebisi. Moralese is a true businessman who onl
y makes decisions based on how to get more influence within Oz. Unlike the more reactionary members of the Latinos, Morales is calculating and deliberate. With Morales in charge, the Latinos prosper in the drug trade. Though less hot-headed, Morales is an absolutely ruthless leader with no reservations about using violence against anyone to achieve his business goals. 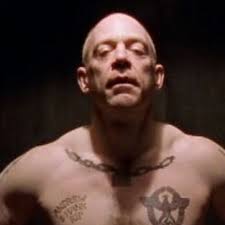 Convicted October 21st, 1992, aggravated assault in the first degree. sentenced eight years, up for parole in five. In the series he kills another inmate, Alexander Vogel, by hanging his ankles in the gym and carving “JEW” on his chest. Vogel had not done anything specific to offend Schillinger, he simply needed to make a kill – any kill – to restore his reputation after another inmate, Beecher, beat him up and took a dump on his face. He’s the leader of the Nazi-like Aryan Brotherhood.

Vern is often responsible for some of the funniest yet darkest moments in the show. He gets some eye tattoos mid-season..And tattoos a swastika on his new pet boy’s buttocks as a display of ownership. 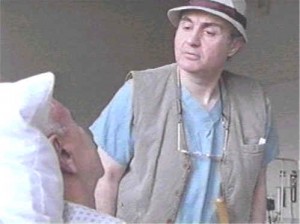 One of the funniest characters on the show. Also one of the strangest. An old guy who like the others, crowds round the television to watch a kids’ TV series because of the presenter, Miss Sally, and her obvious assets. But he goes one better and breaks out of Oz to visit her! 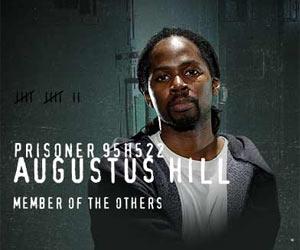 You can’t ignore Hill when talking Oz. His character in real life was boring and sometimes annoying. But, when Hill is in that glass box in his wheelchair, spinning around,  talking about life, death, and everything in between, he became the central person. He’s the one that introduces you to all the perps at the start of each episode. He gradually gets involved in the various sub-plots as the series advance.

Sometimes slick, charming and seemingly genuine, this boy is out only for himself and his passive/aggressive Kurt Cobain lookalike brother, Cyril.  Ryan was outdone in many ways by others in terms of manipulative bastards in Emerald City, but Ryan’s motives were much more clear cut. It was always entertaining seeing his plans fail, and yet he was a survivor.  Perhaps his most dastardly deed was to arrange for a prison doctor who spurned his affections to be raped outside of Oz. An evil Leprechaun who you could trust as much as his crocodile smile. 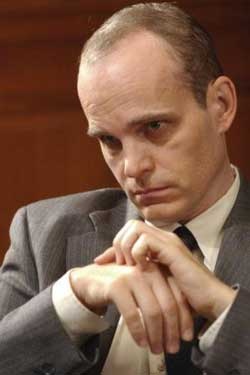 James Devlin is the governor of an unspecified U.S. state in Oz’s fictional universe. Think of the Simpson’s Mayor Quimby combined with the backstabbin’ slippery Corporation bloke in the film Aliens, and the shitty little Joffrey Baratheon, in Game of Thrones.

After campaigning on a platform that includes “no perks for prisoners”, Devlin enacts legislation designed to emphasize punishment in the state’s correctional system. Devlin’s draconian measures make him a figure hated by Oz’s inmate population, and by several staff members.

Throughout the series, Devlin finds himself in legal controversies stemming from his political corruption. His dubious morals sometimes make the inmates of Oz look positively angelic. He is the No 1 sleazeball in Oz, and supposedly on the side of goodness and right. Yeah…. 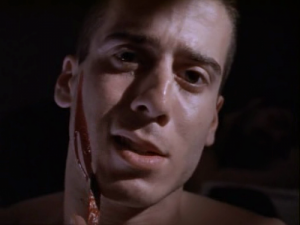 When we saw Miguel get stabbed in the first episode, I thought he was just a throwaway character. However his character just keeps developing and becomes one of the most interesting in the show. He beat an old man just because he scratched his car and was sent to Oz. He does a lot more once inside. One of the more complex but perfectly realised characters.

You could be forgiven for thinking that HBO were playing with fire by introducing a sympathetic yet religiously ruthless Islamic fundamentalist character in the show..

“How do I feel? I feel joyless. My brothers remain behind, imprisoned, suppressed. I don’t just mean my Muslim brothers. I mean every single man that will sleep here tonight, that was cut off from everything that he loves, cut off from his own self.”

Another person whose character develops as he realises that he has to engage with all the other troupes and ne’r-do-wells in Oz in order to help his cause. Even if that means turning a blind eye to some of the teachings in the Qur’an. Peace be with you brother. 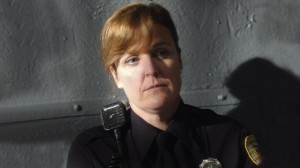 A strange choice perhaps, Claire Howell played by Kristin Rohde. A female Correctional Officer she is extremely unstable (to put it mildly) and prone to sadistic sexual violence. She has sexual relationships with several staff members and inmates in order to dominate them. She accuses the Warden of Emerald City of sexually abusing her after a night out together, when he wants to call a day on the relationship… leading to the arguably best scene in the series in terms of pure oral venom. If you don’t believe why she’s number two in the list, lookee here: http://www.youtube.com/watch?v=IB0zQSuvlts 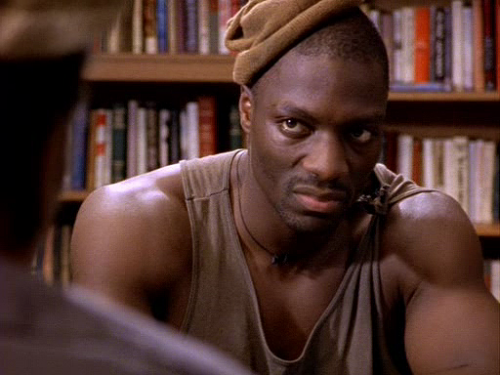 The man has it all- screen presence, believable, loves his “tits” (drugs), sex and power. He strives for all three in Oz in the most entertaining way possible. In Oz for first degree murder (he decapitated a cop with a machete) he has some of the most hilarious and crazy set-pieces. With his curious mini-woollen hat super-glued to his crown, he is threatening all the time. Even in his sleep. The showdown between Kareem and Said (see No 3 above) is a stormer! Any scene with Adebisi not in it is just lacking something.

A man who radiates brooding menace like a black Jack Palance:
http://www.youtube.com/watch?v=fFm6oakSPf4