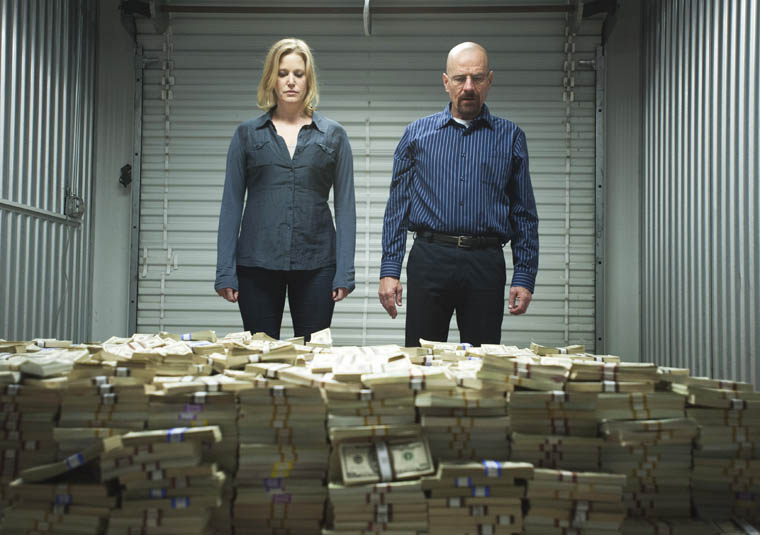 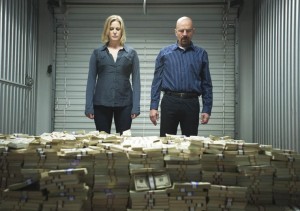 Walter meets with Lydia to obtain the names of Mike’s associates. Lydia partners with him to expand his distribution overseas to the Czech Republic. Walter takes the names to Todd’s uncle, who has ties with Aryan Brotherhood gangs operating in the prisons. The nine prisoners and Mike’s lawyer, including at least one ready to flip for Hank, are killed. Skyler makes another effort to convince Walter to give up meth production, and Walter ultimately surrenders. Walter pays back Jesse his cut of the planned methylamine sale, and ceases the production and distribution. The Whites’ children move back in, and the family seems to be back in order. During a lunch by the pool, Hank skims through Walter’s copy of Leaves of Grass, and the Part 1 finale ends with Hank realizing that Walter is Heisenberg. 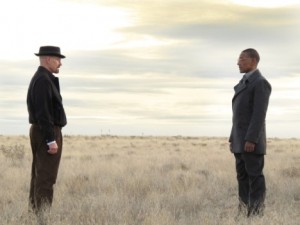 In the aftermath of killing the drug dealers, Walt has a tense meeting with Gus who makes it quite clear that his patience has reached its limit. Walt professes not to know the whereabouts of Jesse, whom, he claims, has fled the state. Gus chooses Walt’s new assistant, who turns out to be Gale. Walt knows that as long as he’s the only cook available, Gus will have to keep him alive. Walt tells Jesse that he is only safe until Gale feels confident enough to take over the lab. Walt convinces Jesse to kill Gale, and Jesse shows up to Gale’s apartment to do the deed. 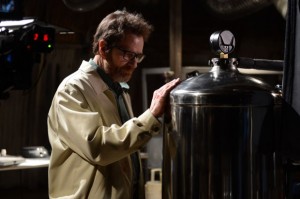 Walt locates Gretchen and Elliott and gives them the money to give to Walt Jr. when he turns 18. He then crashes a meeting between Lydia and Todd, putting the ricin in Lydia’s stevia. He travels to Skyler’s new apartment and admits he did this all for himself. He then drives to the Mafia’s headquarters with a machine gun rigged in the trunk. When Jack brings Jesse in from cooking to show him to Walter, Walt tackles Jesse to the ground and triggers the gun, which wounds Walt and kills the Aryan Brotherhood members, except for Todd, whom Jesse strangles to death, and Jack, whom Walt finishes. Jesse refuses to kill Walt, and drives away. Lydia calls Todd, not knowing that he is dead, and Walt picks up and tells her that she has been poisoned. Walt spends his final moments in the meth lab before the police arrive and find him dead. 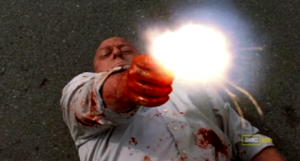 The game Walt and Jesse played forces Hank to confront Jesse and knock him out cold. Skyler pressures Walt to make a deal. Gus, realizing that Tuco’s two cousins want to kill Walt, lures them away as Walt works for him, and he leads them to Hank. Hank’s gun is confiscated due to the attack on Jesse, and unguarded, Hank receives an anonymous call telling him he has one minute before someone comes to attack him. Tuco’s two cousins arrive and shoot Hank multiple times. An injured Hank manages to wound one of the cousin’s legs and kill the other by shooting him in the head.

Walt and Skyler plan to tell Hank that they paid for the car wash with illicit gambling winnings. Hank reveals to Walt that Gale was the cook of the high-grade blue meth. Jesse’s detached complacence leads to over seventy-thousand dollars in cash being stolen from his house. Mike reports to Gus that Jesse has become “incautious” and something needs to be done. Skylar is worried people will come after their family, and Waly delivers his infamous line, “I am the one who knocks!” 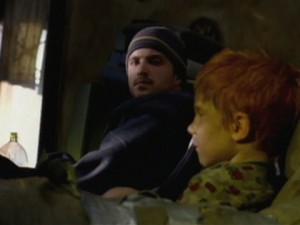 Jesse decides to confront the couple who ripped off Skinny Pete, but he soon realizes that he isn’t a very effective enforcer, and soon finds himself in over his head. Walt goes back to work, but not all is going smoothly. Walt’s story starts to unravel when Skyler gets a call from Gretchen and Skyler thanks her for paying for Walt’s treatment. Gretchen doesn’t reveal the truth, but Walt’s bitterness at their past relationship—personal and business—comes out. Jesse has been overpowered and held hostage by the drug-addicted couple, but the female addict kills her partner, Spooge, by unbalancing a stolen ATM onto his head in retaliation for his repeatedly calling her a “skank” and in order to take the meth in his pocket. Jesse calls the police and flees the scene. 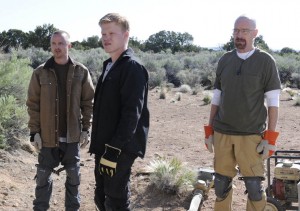 Walt, Jesse, and Todd pull off a train heist to steal virtually a lifetime supply of the methylamine. A young boy, Drew Sharp, rides through the desert on a dirtbike. He stops to play with a tarantula, which he then places into a jar. When he gets back on his bike, he hears a freight train in the distance and drives off to follow it. He approaches the train as the boys are finishing up, and Todd shoots him in the end, driving shock throughout Walt and Jesse. 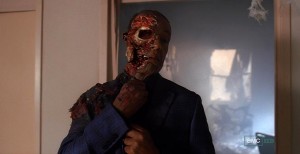 Detectives question Jesse about Brock. Walt, Jesse and Saul realize that Gus may be vulnerable if he visits Hector at the nursing home. Walt visits Hector and offers him a chance for revenge against Fring. When Gus visits, Hector detonates a bomb, mortally injuring Gus. Gus has his iconic move of getting up and straightening his tie with half of a face. Walt and Jesse ceremoniously destroy the lab.

Walter White, a 50-year old chemistry teacher, secretly begins making crystallized methamphetamine to support his family after learning that he has terminal lung cancer. He teams up with a former student, Jesse Pinkman, who is a meth dealer. Jesse tries to sell the meth they made, but the dealers snatch him and make him show them their lab, which is in an old RV. Walt knows the dealers intend to kill him, so he poisons them while pretending to share his recipe, unintentionally beginning the partnership between Walt and Jesse. 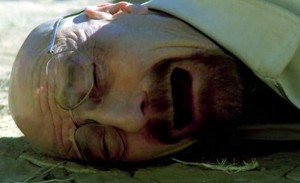 Jack and his team remain while Agent Gomez lies dead and Hank has been shot in the thigh. Walt begs Jack not to kill Hank, offering Jack $80 million in cash in exchange for Hank’s life. Nonetheless, Jack executes Hank, shooting him in the head. Uncle Jack’s men dig up all seven barrels of money, leaving one for Walt while he watches his empire crumble. At Todd’s suggestion, they take Jesse as a hostage in order to get information from him about how much he told the DEA. As Jesse is taken away, Walt tells him that he watched Jane die. Marie tells Skyler that Hank has Walt in custody, and Skyler agrees to tell the truth to Walt Jr. When they return home, they find Walt packing and insisting the family leave immediately. Skyler resists, holding a knife to defend her. Skyler and Walt fight over the weapon, with Walt Jr. defending his mother and eventually calling the police on his father. Walt escapes with Holly. After taking full responsibility for the meth business during a call to Skyler that is monitored by the police, he leaves Holly at a fire station and assumes a new identity through Saul’s contact. After being beaten and tortured for information, Jesse is forced by Todd to help him cook meth when he sees a picture of Andrea and Brock in the lab.