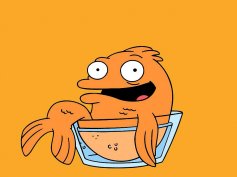 The start of each episode is 43 Cherry Street in the fictional suburb of Langley Falls, Virginia, as Stan, the main character, breadwinner and boorish, prejudiced CIA Agent leaps from bed in his trademark white Y-Fronts to sing a hymn to the glory that is the United States. Since its debut on February 6, 2005, American Dad! has broadcast over 150 episodes.

The series has been renewed through the 2013–14 television season which will be the 10th season. While there are similarities to its sister animated comedy Family Guy, American dad is more “out there” and wacky. Here are some of the main characters: 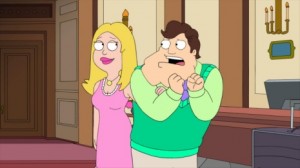 Francine Ling Smith is main character Stan’s wife and the mother of their kids, Steve and Hayley. Virtuous and moralistic she is the perfect counterweight to lantern-jawed Stan’s black and white conservative view of the world. Consequently she often acts as the voice of reason where Stan’s unbridled Republicanism comes to the fore. However, and despite being a tad dizzy, she has been known to shop on the darker side of the street.

Greg Corbin and Terry Bates are a 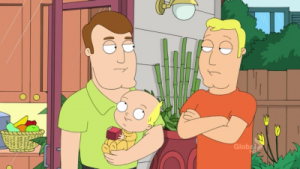 gay couple who move to Stan’s neighbourhood in the second episode. Cue lots of misunderstandings, initial homophobia and some great plot hooks.

Schmuley “Snot” Lonstein is Steve’s moustached and acne-covered Jewish best friend. He has a crush on Hayley, Stan’s daughter, since he was a toddler. He is a chosen one geek. He speaks Klingon, and when all is said and done, is pretty boring. 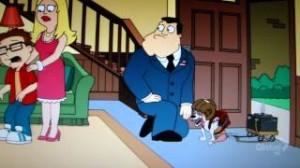 Kisses is the dog that Francine gets for Steve over Stan’s objections in “Stan’s Best Friend”. Due to trauma Stan suffered as a child when he was tricked into killing his dog Freddy, he forbid any dogs in the house, but when Francine gets Steve a dog, Stan soon becomes attached to it. When a hot air balloon full of cats lands on Kisses, crushing him, Stan takes him to Dr. Lizzy, a practitioner of “alternative” pet care. Dr. Lizzy ends up creating a monster, sewing Kisses’ testacles where his eyes used to be and having him carry round a car battery that gives him jolts to keep him alive. One of the best episodes. Come back to Cherry Street Kisses! 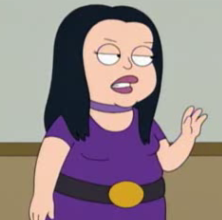 Debbie Hyman is an overweight goth girl who Steve dates. When she and Steve begin dating it causes Stan to become anorexic because he is disgusted by her obesity. Stan accepts her after she demonstrates prowess with firearms.

One of the more bizarre characters, Klaus Heissler is the Smith family’s  goldfish. He was once an East German Olympic ski-jumper until his mind was transferred to the body of a goldfish during the 1986 Winter Olympics by the CIA to prevent him from winning the gold medal, leaving him permanently trapped in the goldfish’s body. Klaus is often seen uniquely scooting himself about the Smith residence, reclined in a glass of water. 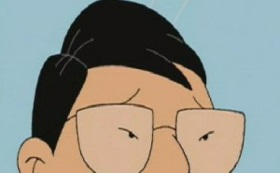 “Toshi Yoshida is – Steve’s Japanese American friend. The running joke is that although he can understand English perfectly, he always speaks Japanese with subtitles. Everyone assumes Toshi has said something completely unrelated or opposite to what he has actually said. He is mischievous,  generally anti-American and can be quite ruthless and cruel. 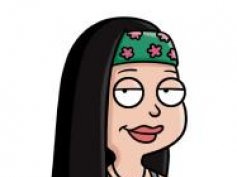 Haylee Dreamsmasher Fischer/Smithis Stan and Francine’s daughter. She is eighteen and attends a community college. She is portrayed as ultra-liberal, closet hippy, which often brings her into conflict with her father. Right on!

Roger is American Dad’s equivalent to Futurama’s robot, Bender. Roger is a zany, depraved, devious, cruel and callous alien, who lives in the Smith family’s attic. Stan feels he “owes Roger his life” after being saved by the alien at Area 51 four years prior to the show beginning. Roger is a hedonistic alcoholic. He takes on many alter egos under various disguises and often messes the Smith f 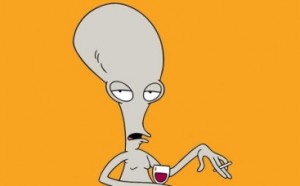 amily big time. Since exposing Roger as an alien would endanger Stan and the rest of the family, Roger’s disguises are his only way of communicating with the outside world. 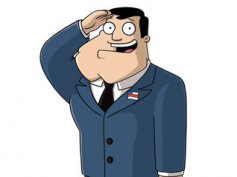 Stanley “Stan” Smith (voiced by Seth MacFarlane) is the title character among American Dad!’s  main characters. Stan is a patriotic CIA agent and staunchly conservative. Stan is Francine’s husband and Hayley and Steve’s father. It is arguable whether Roger should be No 1 but at the end of the day, Stan is the glue that keeps the whole American dad ship afloat, and is usually centre stage in each episode. Stan has developed as a character over the series, and now has a softer side, which he often hates himself for.