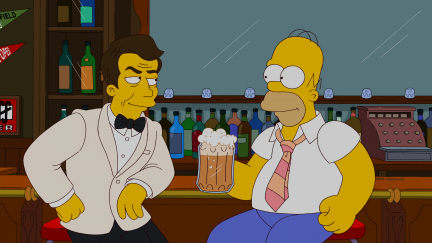 The Simpsons is one of the most popular and well-loved television shows of all time. Ever since the show started airing 24 years ago, it has changed the way people view animated shows with its unforgettable lines and quotes, the creative storylines, and of course, some of the most lovable (and even loathsome) characters that we know today. The show has lead to other animated hits such as a brilliant Futurama. With its vast number of episodes available, many individuals have their own lists of what their favorite episodes are or what the funniest Simpsons episode is. Coming up with a funniest Simpsons episode list is no simple task, but here is one episode that could get you started.

The Spy Who Learned Me

This is a fairly new episode of The Simpsons, and it stands out because it is a reminder of the values that the show stands for. Many fans of the show are familiar with just how hilariously stupid Homer can be, but they are also witnesses to just how adorable he can be as well.

In this episode, Homer and Marge experience a dent in their relationship because of the rude comments that Homer shouts out during their movie date. Meanwhile, Homer also gets a physical bump in the head at work from an accident caused by Mr. Burns. He is then given an eight-week leave with pay, but is unable to enjoy it because of the frustrations at home and with Marge. At first, Homer continues to pretend going to work for a few days. He then gets bored and sees his imaginary friend, Stradivarius Cain (voiced by Bryan Cranston). Cain is a James Bond type, the ladies’ man, very smooth and clean, and just everything that Homer is not. Homer then asks him for advice on how to please Marge, and the plot turns funny when Homer is bad at it, and also when he does turn out to be a ladies’ man. Of course, Marge is the only lady for him, and the show is able to produce some laughs out of how Homer has to face with the jealous wrath of a lime-hating guy.

As with all Simpsons episodes, there was also a subplot here that added to how funny the show was. Set in the school, Nelson is on his usual bullying schedule and demands Bart’s lunch money. This prompts Bart to exact revenge inspired by a documentary they watched at school where the guy ate nothing but fast food for a month and turned into a morbidly obese individual. The plot carries out with Bart giving Nelson some coupons for free burgers and fries, and Nelson of course enjoys the idea. He eats too much and gets fat and weak, so much so that he is unable to return to his bullying days. Of course, Lisa convinces Bart to put a stop to his plan and the plot ends with Nelson turning into a buff and muscled bully thanks to a celebrity trainer.

Some critics will say that this episode has been done before already. The plot is nothing new, the jokes and lines are typical Simpsons fare, and there is not much of a story to keep anyone interested. However, it does merit some really good laughs. Most importantly, it is a good example of what The Simpsons is all about. There is the decent plot that brings together humor and values, the witty lines make the characters so much likeable, and the creativity is ever present as with other Simpsons episodes.