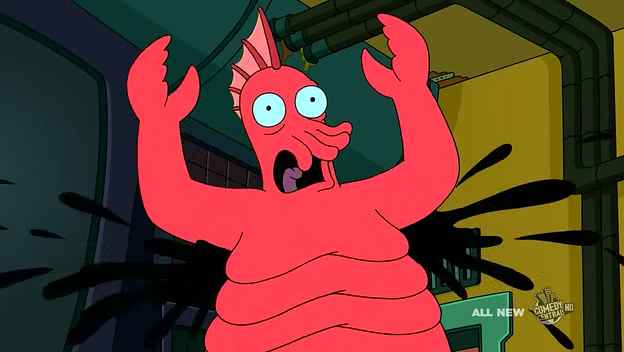 Back in 2003, the year when Futurama was canned by Fox, many people became truly disappointed and, so to speak, died a little inside.  They simply had not enough of Bender, Leela, and Fry.  Some began to wonder why The Simpsons, which to them was a rubbish show, should not be the one to say “goodbye” instead.  These Simpsons bashers thought Futurama was the more creative and more engaging show.

The exact date was August 10, 2003, but reruns of the past episodes were made by Cartoon Network from 2003 to 2007.  While this was going on, viewers wished hard that the makers of show, Matt Groening and David Cohen, would start making a new set of episodes.

The comeback everyone was yearning for happened in 2008, but the anticipation and excitement dwindled slowly as producers opted for direct-to-video releases rather than broadcasting the show through TV.  It was not clear whether it was because there was a lack of interest from the public, there were negative reviews, or there was not enough TV network support, or it was just a scheme to make more money.  The problem is direct-to-video releases are often seen to be of lower quality than TV broadcast releases.

There were four separate films that were released in this period of the show’s history with the last released in 2009.  Thanks to Comedy Central who syndicated the films and aired the last episodes of them as sixteen 30-minute episodes.  Comedy Central continued to host and air Futurama until it announced that it would no longer commission more episodes beyond the show’s seventh season.  As everyone knows, this sci-fi sitcom had its last airing on September 3, 2013.  Groening promised that he will try to forge an agreement with another network.

The producers and everyone behind Futurama would make more money if they listen to what the viewers are saying.  If they are getting close to another deal with another network, they should get some guidance from reviews that were made on the show.

First, people love how the jokes were cracked.  Those four direct-to-video films survived and made money because of the jokes and some very nice moments.  Next, Futurama fans love the first seventy-two 20-minute episodes.  The last series of episodes were aired for 30 minutes each.  That was already good, but people are dying to have the shorter ones.

Third, many people cursed Fox to the ground when it cancelled the show in the first place.  That’s how much people loved and continue to love Futurama.  They contended that Futurama was the best of Fox’s animated line-up that time and it was certainly a lot better than Family Guy, King of the Hill and The Simpsons.

Lastly, the viewers thought that the best legacy is its celebration of mathematics and science.  The numerical references are simply deep and educational.  This is nothing to wonder about.  The show has some of the highly-educated writers headed by no less than Bill Odenkirk, Jeff Westbrook and Ken Keller, all with PhD degrees on their cap.

It’s been two months since Futurama’s last airing and people are asking and anticipating what’s going to happen next, like the way they did ten years ago.  The last appearance of Bender, Leela and Fry on the tube was just a little over two months ago, but already, the heat of anticipation is building up.  What’s next for Futurama?