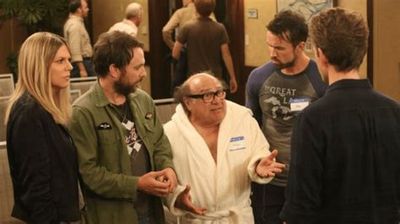 After Mac’s father is released from prison, Mac and Charlie stage their own deaths to save their lives.

Paddy’s has been put on a list of bars that are sexually hostile to women, so the gang must attend a sexual-harassment seminar in order to get off the list.

8. The Gang Dines Out

The gang turns up at the same restaurant for dinner at three different tables. They pretend not to notice they noticed they are noticing each other. Then the one-upmanship begins.

7. The Gang Goes on Family Fight

When the gang appears on a nationally broadcast game show, Dennis does his best to make a good impression.

6. Mac Is a Serial Killer

After reading that a serial killer is on the loose, the gang notices that Mac is acting shady and decides to find out if he’s the man behind the murders.

5. Reynolds vs. Reynolds: The Cereal Defense

When Frank accidentally hits Dennis’s car while Dennis is eating cereal, Frank and Dennis go to the Paddy’s Pub court to face off on who will pay for the damages.

4. The Gang Gets Invincible

Dennis, Mac, and Dee take part in the Philadelphia Eagles’ open tryouts, while Frank drops acid and freaks out when he and Charlie tailgate next to the McPoyles.

Each member of the gang gets one day to do whatever they want while the rest of the gang must participate. This is Mac’s day.

2. The Gang Gets New Wheels

Dee gets in with a group of cool, rich housewives. Dennis hits it off with some everyday blue-collar bros. Frank struggles to renew his license, and Charlie and Mac deal with a new generation of bicycle bullies.

Charlie manipulates Mac and Dennis when he accuses the two of them with sleeping with the coffee shop waitress.