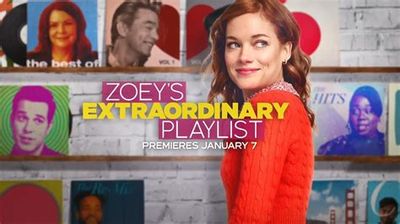 Zoey’s Extraordinary Playlist is a TV series starring Jane Levy, Skylar Astin, and Alex Newell. A young woman discovers she has the ability to hear the innermost thoughts of people around her as songs and musical numbers.

After hearing her first duet, Zoey gets a little too involved in her brother’s marriage; Leif receives negative feedback at work; Maggie is offered an enticing work opportunity.

Zoey has to figure out a clever way to help her mother with an impossible decision. Max unexpectedly bonds with Leif. Mo hits a rough patch with Eddie.

A young woman discovers she has the ability to hear the innermost thoughts of people around her as songs and musical numbers.

Zoey tried to figure out how to control her new abilities while navigating her best friend’s romantic feelings for her and her first day as team leader; and Zoey’s family has hope that Mitch can communicate with them.

Zoey is forced to admit some hard truths to Max. Tobin worries his friendship with Leif is on the rocks. Mo struggles to communicate with the new man in his life.

Things get complicated for Zoey at Simon’s engagement party; Maggie has a night out alone, but it doesn’t go as planned.

Zoey is plagued by a feeling that something bad is going to happen.

Zoey must decide whether or not to get involved in her boss’s Joan’s troubled marriage after she hears Joan sing a “heart song.” Zoey creates a new program for the family to communicate with Mitch, but when his first word is not what they expected, Maggie reaches a breaking point.

Zoey learns that silence can speak louder that words, as relationships come to a tipping point.

Best Episodes Of The Mighty Boosh

The Best Science Fiction Shows from 2012