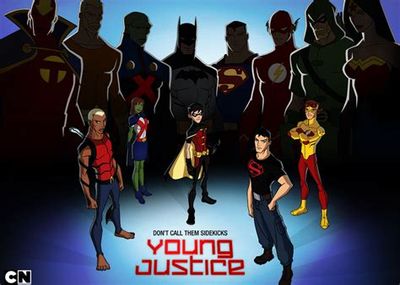 On his birthday, Kid Flash must deliver a transplant heart in a race against time, artificial extreme weather conditions and supervillain opposition.

With no news on his sister, Brion is growing more and more impatient, but Batman’s on the case.

Artemis returns to the team to protect an important satellite launch.

Aliens once again threaten the Earth, but with the Justice League split and scattered, only Earth’s first and greatest hero can save us!

The betrayals come fast and furious, and with them, a reckoning.

The team gets a new member and a new mission – a mission that may finally expose all of the team’s secrets … and all of their lies!

Black Manta gives Miss Martian 24 hours to live, but that may be more time than Aqualad has, with Sportsmaster and Cheshire on the hunt for his head!

A conqueror from another world becomes a wild card in an intergalactic game of supremacy – placing planet Earth square in the jackpot.

When the earth is threatened by the Reach, the team must team up with Lex Luthor and fight the reach with out the Justice League.

The Light calls a summit to decide the final fate of Aqualad, the team … and the entire planet Earth!