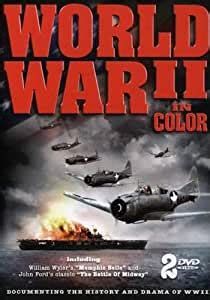 Allies turn the tide in the Atlantic, where initially German U-Boats harass freely convoys to supply Britain. The Kriegsmarine calls off their submarines. The route to bring American soldiers who will land on D-Day is clear.

After a careful campaign of disinformation that throws the German defenders off-guard, the Western Allies finally land on Normandy. After fierce fighting, they establish a foothold in Europe. France is liberated.

The Western Allies secure supply routes that will allow them to enter Germany, and the Ardennes counter-offensive fails. The Red Army advances rapidly, and Stalin shows uses the war for Empire-building. The SS implements the Holocaust.

Japan attacks the USA on 7 Dec 1941. For the next 6 months, they continue to have successful attacks. However, by the end of the battle for Guadalcanal in Feb 1943, they are completely on the defensive.

Country after European country falls before the unstoppable German blitzkrieg.

Germany makes critical errors during the bombing of Britain.

The activities of nations after World War I that lead to World War II.

2. The Mediterranean and North Africa

Italy’s failed attacks in the Mediterranean region draw in the Germans.

1. Victory in the Pacific

Japan keeps continues its suicidal resistance, and invading it looks costly. After 2 atomic bombs, the Emperor intervenes and stops the War. Stalin grabs territory in East Asia. The War is over, and the Atomic Era and the Cold War start.