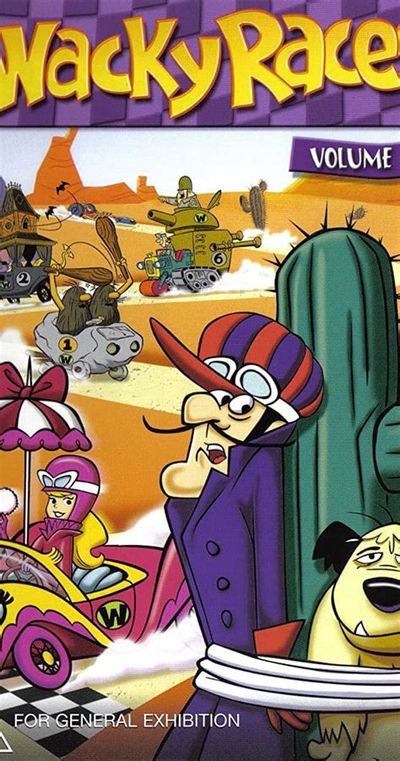 Ballpoint, Penn., or Bust: Dick Dastardly causes flat tires with a box of tacks on a jaunt to Ballpoint, Pennsylvania. Fast Track to Hackensack: Outside the town of Law ‘n Order, Dastardly changes the posted speed limit sign from 35 to 85 to creat a Fast

The Ski Resort Road Race: After causing an avalanche, Dastardly uses a ski jump for his own getaway, but the other cars follow him. Overseas Hi-Way Race: On a race from Key Largo to Key West, the racers must cross the famous series of bridges that connect

In the first race the Racers are racing from Slipover, New Jersey to Upsan Downs. DD lures them into the Holiday Amusement Park which is closed for repairs. He uses the roller coaster, House of Horrors, and a Carousel to slow down the Wacky Racers. Things are going his way until the Profeesor turns him into a human cannonball. In the next race the finish line is in Noah’s Ark-Ansas. On the way they run into war games and DD tricks the Surplus 6 into the games. DD is also forced to participate against his will. He also uses a beehive, a steel trap and a chocolate …

The Baja-Ha-Ha Race: In Mexico, Dick Dastardly and Muttley try to slow the other drivers by using a herd of cow-shaped balloons to block the road. Real Gone Ape: Dick Dastardly hypnotizes a giant gorilla in an attempt to wind the race.

The Dopey Dakota Derby: A wanted poster inspires Dastardly to disguise himself as a bandit. Dash to Delaware: Dastardly plots to cover the roadway with icing and send Peter and Penelope spinning into a cake-making machine.

Eeny, Miny Missouri Go!: Dick Dastardly plots to have an aquarium whale swallow the rest of the contestants! The Super Silly Swamp Sprint: Dastardly and Muttly unleash a squadron of mechanical mosquitos to wreak havoc on the other cars.

Whizzin’ to Washington: When the Ant Hill Mob zooms past Dick Dastardly, he directs a police officer to chase them.

The racers are racing for the finish line at Zippy Mississippi. They are slowed down on the way by a Southerner who thinks Yankees have invaded his plantation. Colonel Cornpone thinks DD is a Yankee Carpetbagger. DD tells him he is a Southern Gentleman and the other racers are invading Yankees. In the next race they are heading towards Shin Splint, Louisiana. Along the way DD lays down bouncy pavement and lures racers into the Soggy Bogs to slow them down. DD’s best trap takes place at the ACME Wild Animal World where he lets it be known that there is a $50,000 reward…

The racers are heading towards Mustard Spread, Arkansas. On the way the Ant Hill Mob is spotted and pursued by a motorcycle cop. The Mob hides out in a small cabin which happens to belong to the Seven Dwarves. In the next race they are racing towards Lemon Twist, Nevada…population 1. They pass through the ghost town of Spookane where DD tries to slow things down with a phony offer of free Koo Koo Kola. They are all terrorized by two mischievous ghosts.

Best Episodes Of Make It or Break It