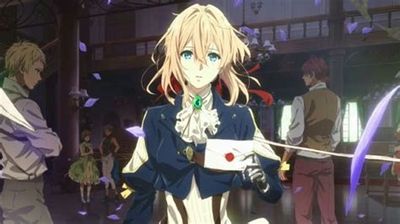 Violet Evergarden is a TV series starring Yui Ishikawa, Raissa Bueno, and Erika Harlacher. In the aftermath of a great war, Violet Evergarden, a young female ex-soldier, gets a job at a writers’ agency and goes on assignments to…

As Violet searches for the Major in the present day, she recalls the time she first met him and became the terrifying weapon that turned the tide of the war.

9. Somewhere, Under a Starry Sky

Violet, along with a number of other dolls, arrive at the Shaher Observatory in order to help the scholars make copies of a number of rare books. Violet is paired with a young scholar named Leon, who initially dislikes her and dolls in general. However, he is impressed with how quickly she works, and begins to soften when he sees that she doesn’t care about his background or upbringing as an orphan. He invites Violet to view Alley’s Comet with him, which only appears once every two hundred years, and she accepts. While the two stargaze, Leon explains that his father …

Violet goes to assist a famous writer, Oscar Webster, in writing his next play. However, she arrives to find him a drunk recluse. Violet manages to convince Oscar to suspend his drinking while they work, and they begin writing the play. The play is about a girl named Olive who uses her power to summon magical sprites to defeat a beast, but in doing so sacrifices her ability and becomes stranded away from her home and father. Violet becomes curious about how the story will end, which Oscar hasn’t decided upon yet. Violet then finds a parasol, triggering an angry …

6. You Write Letters That Bring People Together?

After gaining some experience of working as Auto Memories Doll, Violet Evergarden went for her first important commission to a Princess who is having issues of her marriage.

5. I Don’t Want Anybody Else to Die

Violet goes to assist a soldier named Aidan of the neighboring country Ctrigal which is in a state of Civil War.

4. Loved Ones Will Always Watch Over You

Violet goes to assist a medically ill woman whose daughter Anne assumes that she is being ignored by her mother. It isn’t until later on her life she realizes what she was really doing for her.

After the end of the war Violet tries to write down her feelings in to a letter to Gilbert as it was suggested by her co workers for the air show which was going to held after five years due to the peace achieved between the nations.

2. May You Be an Exemplary Auto Memoir Doll

As Cattleya advised, Violet decides to attend an Auto Memoir Doll training school. There, she meets Luculia and they start a friendship.

After realizing that Violet lost Gilbert, she assume her self to be useless but in time she found her existence to be valued by others by accepting the truth of both past and present.

The Best Adventure TV Series from 2000

Best Episodes Of The Handmaid's Tale