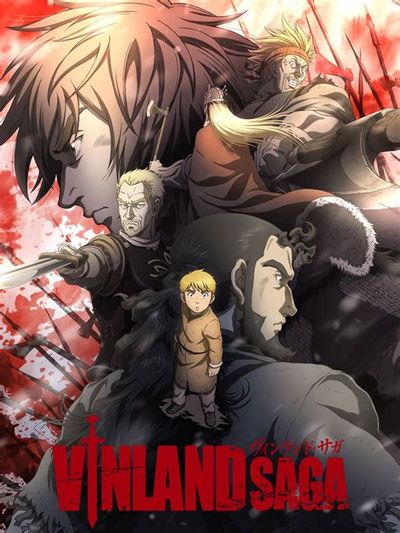 Vinland Saga is a TV series starring Naoya Uchida, Hiroki Yasumoto, and Yûto Uemura. Thorfinn pursues a journey with his father’s killer in order to take revenge and end his life in a duel as an honorable warrior and pay his father…

Thorfinn kills his first man. As more time goes on Thorfinn kills more men and becomes more skilled. One day when Thorfinn is in battle he gets shot with an arrow and ends up unconscious. An English woman and her daughter help him recover.

9. Out of the Cradle

Thorfinn and Thorkell agree to have a duel over the fate of Askeladd. Thorkell looks forward to facing off against Thors’s son, Thorfinn, and asks him what a true warrior really is. Meanwhile, Canute is suddenly ambushed while he attempts to escape, and has a dream about a certain individual.

8. The Light of Dawn

In middle of the inclement weather, Askeladd’s men find a village. Cornered by the blizzard, the vikings show their true nature.

As the ships are surrounded by Askeladd’s pirates, Thors decides to take action on his own hands in order to protect the crew and his son.

6. The Battle of London Bridge

In October 1013, King Sweyn leads a fleet of Danish and Viking ships in an attempt to take London Bridge of England. Askeladd’s army, hired by the army of Denmark, was among them. However, after the betrayal of Thorkell the Tall, a Viking known for his overpowering strength, London Bridge has become impregnable. Askeladd tells Thorfinn he’ll reward him with a duel if he’s able to kill Thorkell.

Thorfinn begins his duel against Askeladd with Canute and Thorkell as witnesses. However, Thorfinn is unable to strike as he stands overwhelmed by the extraordinary mood that overtakes Askeladd after Bjorn’s departure.

4. End of The Prologue

As the Imperial Council proceeds, Askeladd is shocked by the news of Wales. As he gets called by the king, he makes a last stand.

Askeladd’s men continued their march to escape Thorkell. However, Torgrim and his friends were hatching a plot to switch sides and join Thorkell, taking Canute with them. Torgrim finally launches his rebellion and corners Askeladd, negotiating with him to hand over Canute, then Thorkell arrives in the midst of the confusion.

Canute’s party arrives in York to attend the Imperial Council. Although Canute had wanted to strike out against King Sweyn

Thorfinn is told to think about what he has to do to beat Thorkell. Askeladd treats Thorfinn’s wounds so that he may fight again someday, and proposes a joint strategy to help the two of them survive longer.

Best Episodes Of I, Claudius