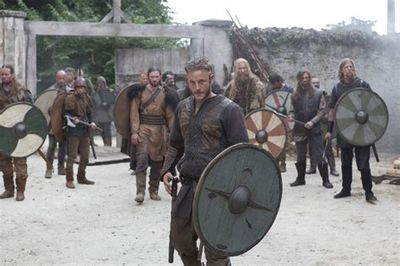 The Vikings hit Paris with a second assault; Emperor Charles has to make a difficult decision.

In Iceland, Ubbe learns the truth about Kjetill and has a difficult decision to make. Back in Norway, the battle against the Rus has had grave consequences. But re-enforcements have arrived, and Bjorn has an idea that may yet save the day.

The Viking army causes panic in the English countryside as King Ecbert and Aethelwulf plan the defense of the Kingdom of Wessex.

Prince Aethelwulf finds himself subject to the Vikings’ battle master plan; Ecbert remains behind with a plan of his own.

6. In the Uncertain Hour Before the Morning

A ferocious battle between the Vikings and the Franks eventually comes down to Ragnar against Rollo. The outcome will seal the fate of the two brothers.

With one last chance to take Paris, Ragnar and his Viking troops take a daring chance. Ragnar asks Bjorn for a favor that could change the course of Viking history.

King Aelle can’t hide his pleasure when Ragnar arrives in a cage and shows him no mercy.

Preparations for the Paris raid pick up speed, and Rollo thinks about the Seer’s prophecy.

Ragnar returns to Kattegat after the defeat in Wessex and places his trust in those who have stayed by his side all this time.