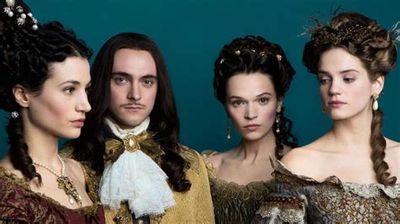 Duchess Henriette becomes suddenly ill when she returns from a visit to her brother in England. They fear she might have been poisoned, so King Louis XIV shuts all access To Versailles.

Philippe returns to Versailles a war hero. Louis holds a celebration, while losing confidence in Fabian due to the constant highway robberies that are impeding the funding of his palace. Cassel refuses to attend the celebration.

King Louis XIV of France begins preparations of transitioning his fathers hunting lodge into a grand palace he envisioned.

King Louis XIV’s continued insomnia makes him increasingly volatile, meaning Marchal’s loyalty counts for nothing. Claudine continues to investigate the mystery toxin, while Sophie seeks a solution to her situation.

The construction workers at Versailles are on strike. Cassel moves to Versailles after his home is burned. Louis falls ill.

Louis gives Philippe a tedious task that the Chevalier helps him with. Rohan makes his true intentions known. Fabian arrests and punishes Béatrice. Henriette succeeds in the diplomacy in England.

3. Who Will Watch the Watchmen?

King Louis wishes for the nobility to live at his side in Versailles, so long as they have proof of their nobility. An emissary from Africa appears at Versailles. Cassel recruits Montcourt.

Marie-Thérèse gives birth to a child, but it’s not the King’s. Philippe wants to join the fight against the Spaniards. Montcourt is humiliated by King Louis.