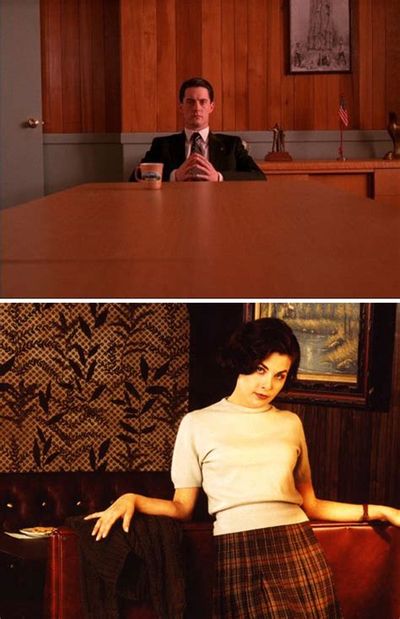 Audrey cons her way into working at the perfume counter where Laura worked and discovers that it’s being used as a recruitment post for One Eyed Jack’s. James, Donna and Maddy plan to lure Jacoby away from his office.

A wounded Agent Cooper has a vision of a giant who gives him several clues about the murder of Laura Palmer. Shelly and Pete recover from the mill fire, but Josie and Catherine are missing.

The small northwest town of Twin Peaks, Washington is shaken up when the body of the Homecoming Queen, Laura Palmer, is discovered washed up on a riverbank, wrapped in plastic.

Albert determines that neither Leo nor Jacques killed Laura, but he is unable to find any leads into who shot Cooper. Cooper says they must find the third man, who he believes to be Bob, the gray-haired man.

Audrey is hired at One Eyed Jack’s, but is caught in a trap when her father arrives. Cooper gets Jacques Renault to reveal the details of Laura’s last night in the cabin. Deputy Andy saves Truman’s life and apprehends Renault.

Ben Horne’s brother, Jerry, arrives in Twin Peaks; together they travel to One Eyed Jack’s and meet with the madam, Blackie O’Reilly. Audrey leaves a clue for Cooper. Deputy Hawk finds a bloody towel near the crime scene.

Windom Earle sets his sites on the Miss Twin Peaks contest. Lucy chooses a father for her baby. Leo is punished when he frees Major Briggs. Cooper unlocks the key to entering the Black Lodge. Annie and Dale make a commitment.

Agent Cooper follows Windom Earle and Annie into the depths of the Black Lodge. Big Ed and Norma get a shock when Nadine suffers head trauma. Andrew and Pete unlock Eckhardt’s final box and Audrey stages an act of civil disobedience.