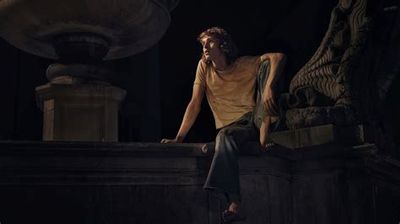 Trust is a TV series starring Harris Dickinson, Donald Sutherland, and Hilary Swank. Rome, 1973. John Paul Getty III, the heir and younger member of an oil tycoons’ saga, is kidnapped by the Italian mafia in order to get a ransom.

Angelo and young Paul Getty attempt to agree on the appropriate next move. Primo and Leonardo begin to organize the local community.

After Gail finally recovers her son J. Paul Getty III from the kidnappers, the key kidnapper Primo, decides it is time to tie up loose ends and their loose lips.

The kidnap plot is hatched after the younger John Paul G is told that he has racked up $6,000 in debt at a local restaurant.

Young Paul gets to know his captors; Primo opens a line of communication to Gail.

5. In the Name of the Father

Leonardo celebrates his son’s Confirmation with Primo, Salvatore and the other Calabrians, but unresolved business casts a shadow over the special day.

4. White Car in a Snowstorm

An unexpected development prompts Gail to travel to London.

3. The House of Getty

J. Paul Getty is in the process of burying his eldest son George, who committed suicide. His three remaining sons besmirch him and wonder who will be chosen as the next in line to run their father’s vast empire.

Old Paul tries to follow through on his plan, Gail grows hopeful, but Big Paul obsesses about the quarrels of the past.

The Getty family fears the worst after a gruesome discovery is made.

The Worst Action Shows from 1999