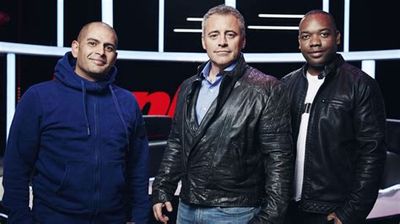 It’s the ultimate test of man against machine – or should that be dog against machine – as the Top Gear team set out on one of their most ambitious and arduous challenges ever. Jeremy Clarkson, James May and Richard Hammond take part in an epic land race starting in the town of Resolute, Northern Canada, finishing 450 miles later at the Magnetic North Pole.

Jeremy tests the new Audi R8 V10 Spyder and compares it to the Porsche 911 Turbo Cabriolet. The boys attempt to create their own camper-van (also know as motor homes) by using a car of their choice and turn it into a camper-van complete with sleeping accommodations, cooking facilities and restrooms. Actor Andy Garcia is the Star In A Reasonably Priced Car.

Clarkson, Hammond and May travel across the Middle East in a £3500 sports car to reach Jerusalem, and encounter all the political minefields (and the real ones) the Three Wise Men didn’t.

The boys headed to Vietnam for epic road trip across the country. Each of them were given 15 million dong (about US$ 1000) to spend on buying some wheels and must make it to the north of Vietnam.

6. Making A Train Out Of A Specially Modified Car And Caravans As Carriages

The guys attempt to make train travel cheaper, faster and more interesting by replacing the conventional carriages and locomotive with a series of caravans attached to a specially modified car. It’s either the world’s most ingenious idea or the prelude to the world’s biggest accident. Jeremy is also out on the track comparing the rip-snorting Jaguar XKR-S to the recently updated Nissan GT-R.

Jeremy, James and Richard each buy a used two-wheel drive car for £1500 and drive it for 1,000 miles (1,600 kilometres) across Botswana from the Zimbabwe border across the Makgadikgadi salt plains and through the Okavango Delta to the Namibian border. The Stig’s African cousin also makes an appearance.

Three daring BBC presenters continue their journey through the Shan region of Burma. Later on they discover another challenge waiting for them at the river Kwai.

The boys acquire traditional classic convertibles before setting off an adventure. The trio are also challenged to each buy a high-mileage and low-quality SUV before undergoing a series of challenges.

Richard road tests the new Volkswagen Touareg as well as having race against two snowmobile racers in a customized Volkwagen Touareg (the one used in the Dakar Rally). James tests the new Buggati Veyron Supersport and attempts to take it to its top speed of 258mph. Jeremy documents the life of the legendary racing driver, Ayrton Senna with interviews from racing drivers who raced with him to the those who were huge fans of Ayrton Senna as well as looking back at archive footage from past races to see what made him the greatest racing driver of all time. Tom Cruise and…

The boys went to Bolivia for a 1000-mile epic journey from the Amazon Rainforest to the Pacific Ocean. For this journey, they have to buy cars that are 4WD (in which the producers recommend) and must be found in the Bolivian second-hand classifieds.

Best Episodes Of Greatest Events of WWII in Colour