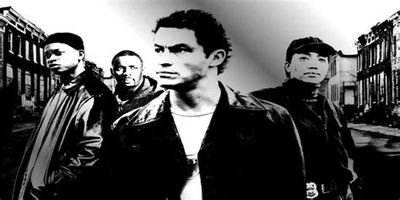 Campbell tries to smooth out the transitions in the police department. The newspaper scrambles to confirm surprising news from City Hall, but lose out to the TV media in scooping a high-profile Grand Jury appearance.

Avon, Stringer and Wee-Bey discuss how best to deal with Omar after the attempted hit on Avon, deciding to let him think they want peace, whilst secretly planning to kill him. As such, Omar and Stringer meet for a parley, with security provided by Prop Joe. Meanwhile, Stringer insists on decreasing Avon’s visibility in light of the detail’s attempt to follow him after the basketball game. An irritable Phelan signs an affidavit for the new phone being used by the pit crew, and Pearlman tells McNulty that he is not up for automatic re-election, possibly because of the …

Kima slowly recovers in the hospital. Stringer changes operations in the pit and the towers, rendering the wiretaps and clones useless, and prompting Burrell to begin dismantling the detail. Avon and Stringer meet Levy to discuss where their organization is vulnerable. Unbeknownst to the detail, Wallace returns to the pit to resume work. When Prez starts pulling political campaign finance reports, Pearlman is called to a meeting with a worried State’s Attorney, and an angry Clay Davis confronts Daniels. Meanwhile, Stinger issues a difficult order to Bodie and Poot. …

The detail has a setback. Russell and Bunk revisit Philly, looking for evidence. Brother Mouzone talks with Stringer Bell regarding their agreement, leaving Bell to contend with Avon Barksdale. McNulty and Greggs return to the Westside, where they discover new connections. Herc and Carver feel disrespected by fellow officers. Nick tries to come to terms with the Greeks, and himself.

On the trail of missing bodies, Freamon turns to a higher authority after being rebuked by Landsman. Carcetti finds his promises of prosperity undermined by the school debt, forcing him to contemplate groveling before the Governor in Annapolis.

While Greggs’ life hangs in the balance, the entire department attempts to hunt down Savino. When Wallace flips, willing to testify that Stringer, Wee-Bey and Bird killed Brandon, Daniels stashes him in his grandmother’s house on the outskirts of the city, but he soon becomes restless. Stringer tells Wee-Bey he needs to get out of Baltimore until the Savino investigation cools off, whilst Avon considers his next move. When McNulty and Pearlman try to pressure Levy into giving up Savino, he proves smarter than they gave him credit for. Meanwhile, when the detail’s hand…

Due to the camera at Orlando’s, the detail gather enough information to arrest Avon and many of his people, but, with Wallace dead, they are unable to bring charges against Stringer, who’s left on the street. However, disgusted that Avon and Stringer had Wallace killed, D’Angelo flips on the entire organization, giving the detail more information than they could have ever hoped for. As Daniels figures out who the snitch is in the unit, Herc is shocked when he is passed over for promotion in favor of Carver, who scored lower on the sergeant’s exam. In Philadelphia, …

Avon readies his troops for a seemingly endless war against Marlo. The detail works towards the top rungs of the Barksdale organization with the information garnered from the wire. While Royce continues to grapple with Amsterdam, Burrell offers a deal to minimize the fallout. Carcetti’s political plans become obvious to his friend and fellow councilman Tony Gray. Bubbles offers his view of the world. McNulty changes tack.

Carcetti maps out a damage-control scenario with the police brass in the wake of a startling revelation from Pearlman and Daniels. Their choice: clean up the mess…or hide the dirt.

Best Episodes Of The World at War