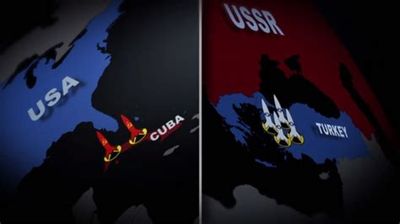 Who started the Cold War? In a month-by-month analysis, the initial aggressors are less apparent. Yet, the relationship between the Soviets and the West are none-the-less solidified with Winston Churchill’s Iron Curtain speech. The US enters the “Red Scare” and creates The House Un-American Activities Committee in an attempt to place the “right” ideology as a bedrock for US culture. The rise of Joseph McCarthy , with the aid of the FBI, turns into a near witch hunt for Communists in America.

The US invasion of Panama canal brings about a failed chance at peace after the end of the Cold War. How far is the George W. Bush administration willing to go to establish security? A new prospect of “endless war” in Iraq and Afghanistan causes a shift in America’s status with the world.

The Untold History of the United States examines the end of and the period immediately after World War II. It looks at Stalin’s efforts to seize control of Poland and Eastern Europe, Democratic party bosses efforts to drop Henry Wallace from the 1944 presidential ticket, and British efforts to maintain their colonial holdings after the war.

The Untold History of the United States examines World War II. It offers special attention to the Spanish Civil War, Roosevelt’s desire to enter the war on the side of the allies, the strategic Japanese decisions that led up to Pearl Harbor Attack, and the often overlooked role that the Soviet Union had in winning the war.

With the replacement of Ronald Reagan after Carter, the relationship between Mikhail Gorbachev and Ronald Reagan offers new attempts at peace as the Berlin wall crashes down. Fears surface as Iranian students occupy the US embassy in Tehran and the event turns into The Iran hostage crisis.

Many events from the 1920s that led up to the establishment of the leaders prior to and during world war II. Most everyone knows about prohibition but few know about the US bankers profiteering extensively by loaning money to post world war I Germany who then paid its war reparation to Britain and France who in turn paid their war debts to the US. USMC general Smedley Butler speaks out against these acts of profiteering. He is suspiciously left out of modern US history.

Homeland Security, in Iraq, Afghanistan, and a worldwide global Security State. The cannibalization of the U.S. economy continues. Barack Obama and the destiny of the American Empire. Directed and narrated by Oliver Stone .

Documentary by Oliver Stone . E.5: Eisenhower and the CIA played a great part in the shaping of the world in the 1950’s;the development of the Cold war and the nerve-wrecking battle against communism, driven on by the U.S.

JFK and the Bay of Pigs; on the brink of total war during Cuban Missile Crisis; early Vietnam; JFK’s attempts at peace with Khrushchev; JFK assassinated. Directed and narrated by Oliver Stone .