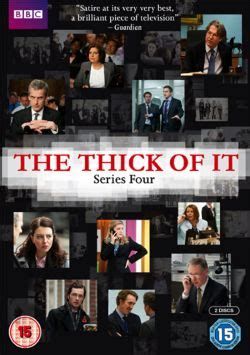 The Thick of It is a TV series starring Chris Addison, James Smith, and Peter Capaldi. Set in the corridors of power and spin, the Minister for Social Affairs is continually harassed by Number 10’s policy enforcer and dependent on…

Mannion is a reluctant participant at Pearson’s Thought Camp at a country hotel, where mobile phones are forbidden. Back at the ministerial office Phil finds the place deserted except for Glenn, still working on the Fourth Sector for Nicola, and Fergus and his advisor Adam, who are talking to economist Tara. Then the news breaks that anti-government protester Tickel has killed himself. Everybody rushes to inform Mannion, who can only get a phone signal on his mobile by standing on a children’s slide – in which embarrassing pose he is photographed. But there is worse …

Terri has returned from compassionate leave after her father’s death and Hugh is back from holiday. The department has a new name, the Department of Social Affairs and Citizenship, though they seem to be dealing with issues no other departments want. They also have a new building but it is a disappointment – with no ventilation and the email system is down so the staff must temporarily use their own email addresses. Hugh takes a dislike to educational advisor Roy Smedley over special schools and uses Terri’s computer to send Glenn an email calling him a four letter …

The witnesses from the Goolding Inquiry nervously await the result. A further crisis looms over the number of police staff being cut by the Home office, leading to a backlog of paper work and queues outside police stations. Whilst Mannion and his advisers panic, Ollie sends Dan on a fact finding mission to Lewisham police station though it is not very productive. After delivering a rant to Ollie about his inadequacy as a replacement, Tucker tries to create a smoke screen by getting himself arrested, though this also falls flat. Glenn also quits, tearing strips off his…

Nicola has been in post for a week and already the press are doubting her competence. So it is not a good time to learn that ‘somebody’ in the department has accidentally wiped the immigration records of 170,00 people over the past few months. Nicola has a press meeting with hostile Guardian journalists coming up and Tucker must ensure that they do not get to learn of the mistake. Needless to say they do and when Glenn refuses to obey her by sacking secretary Robyn as the scapegoat Nicola feels even more undermined.

As press secretary Terri piles more departmental press releases on Hugh’s desk, hard-hitting journalist Simon Hewitt publicly denounces his ability and Tucker is aghast to find out how ignorant Hugh is of popular culture, providing him with an idiot’s guide tape. Ollie decides there should be a focus group and that they should be guided by a representative of middle England – Mary. Hugh is charmed by her. Tucker is wary and determined to get one over on Hewitt.

Nicola is keen to find a famous sports person to front her Healthy Choices campaign but Tucker is officially on holiday – or rather recovering from the result of his spat with Terri. Thus new spin doctor Steve Fleming is brought in and whilst Ollie may regard him as a saviour this is the man Tucker once drummed out of the party. The last thing he wants is to give his old adversary power over him so he hosts a cosy lunch for the press, stressing that, whatever people think, he is still in charge.

4. The Rise of the Nutters

With Hugh in Australia and Glenn in Wales, Ollie is left in charge, feeding policies to junior minister Ben Swain. He is one of the ‘Nutters’, the group keen to take power when the P.M. resigns and keen to make a name for himself – which he does in the wrong sense when Jeremy Paxman skewers him on ‘Newsnight’. This is music to Tucker’s ears as it is in his interest for the P.M. to remain in power for as long as he can. Ollie’s new girlfriend Emma is working for Shadow Minister Peter Mannion and hopes to impress by stealing one of Ollie’s idea for use on their …

Ministers and aides from all parties are summoned to give evidence at the Goolding Inquiry into the events involving and following Tickel’s suicide. First witness is Pearson, whose obscure jargonese strikes the panel as being at odds with his role as an information giver, whilst Tucker is reprimanded for trying to score political points. It soon becomes apparent that opposing sides are using the inquiry to discredit each other whilst those who sent the emails do a good job of discrediting themselves. Mannion struggles, as does Nicola (even though she called for the …

Nicola and Peter Mannion go head to head on Richard Bacon’s Radio 5 phone-in show. Nicola does not do well with her idea of “being inspired out of poverty” and Mannion, despite Phil’s sycophantic praise, fares no better. Tucker and Pearson, listening in, decide they must come to the rescue of their charges and, after exchanging insults and blackmail threats regarding members of the other’s party, come to see that they have a lot in common. Emma meanwhile dumps Ollie.

Peter Mannion’s speech on immigration, leaking the PM’s policy, did not have the effect Tucker desired and now the PM is resigning, leaving the way clear for the Nutters and their leader Tom. Ollie has been promised a job by young Nutter Ben Swain, Tucker’s assistant has encouraged Hugh’s predecessor Cliff to stand as a stalking horse and Glenn is keen to keep Hugh in the frame whilst his boss is in Australia. Fortunately Tom has a dark secret which is just what Tucker is looking for but will it be enough?

Best Episodes Of Six Feet Under