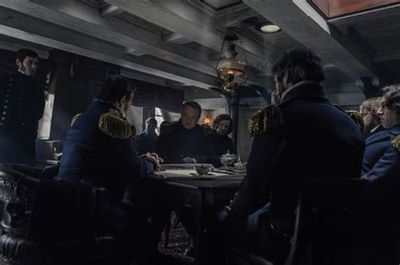 With the end of their provisions in sight, officers contemplate a tough, risky strategy while struggling to raise the men’s worsening spirits.

Two ships, brave captains and their crews, royal marines, all battle the elements and unknown adventure while remembering home and mission beginnings.

A series of cunning attacks on the ships proves to the men they are not battling an ordinary bear.

Deaths under mysterious circumstances create paranoia among the men, and some of the crew may be considering mutiny.

After a long winter trapped in the ice, scouting parties are sent out in search of open water. One of the teams makes a frightening discovery.

Hope comes in strange forms, and the question of what the men are willing to do to survive begins to be settled in both noble and horrifying ways.

The expedition’s epic journey reaches its climax as men find themselves in a final confrontation with the Inuit mythology they’ve trespassed into.

A strange illness begins to show itself while another more familiar one jeopardizes the expedition’s most valuable resource – its captain’s judgment.

As the men make new attempts to find rescue, a series of shocking events underscores how vulnerable and exposed their situation has become.

With something stalking the ships, the expedition’s commanders debate their dwindling options.

The Worst Mystery Series from 2015