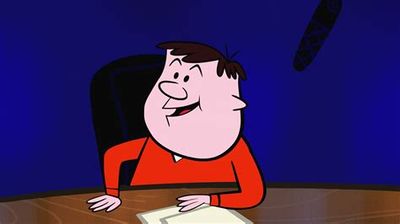 Responding to fan emails, Karl is put on the spot about whether he would choose Ricky or Stephen to rescue from a sinking ship. Other topics include: face transplants, Karl’s lessons for children and suggestions for redesigning various creatures.

Karl ruminates on museum collections, his invention for a mug coaster, and a new movie pitch.

Karl ruminates on the insect world; Stephen recalls the horrors of buying condoms.

Karl imagines what life would be like if he had an exact doppelganger. Ricky poses a logic riddle that Karl has difficulty solving.

Karl ponders his entry interview with God at the Pearly Gates. Stephen reads from Karl’s Diary hi-lighting alien mind reading and whether having one’s head on backwards is harder than having one’s hands reversed. Karl offers his top five list of freaks.

Stephen and Ricky have Karl complete the ‘Inside the Actor’s Studio’ questionnaire which leads to lively discussion about worm and flower cognition. Karl ponders organ donation in light of the possibility of an afterlife. Stephen reads from Karl’s Diary.

Ricky reads some predictions for the future from an academic study, which leads Karl to share his theories. Stephen asks the guys iftoday were the end of the world, what would they do with their last day?

Topics include Karl’s Valentine’s Day advice, interpreting Wittgenstein and the rights of fish. Stephen and Ricky explain Kafka’s ‘Metamorphosis,’ and Karl ponders life as a beetle. In Monkey News: Karl announces this will be the final segment.

Karl pitches a bizarre idea for a film, in which the comatose hero, played by ‘Clive Warren,’ has his brain transplanted into hiswidow’s head.

The Best Horror TV Programmes from 2014

Best Episodes Of Comedians in Cars Getting Coffee