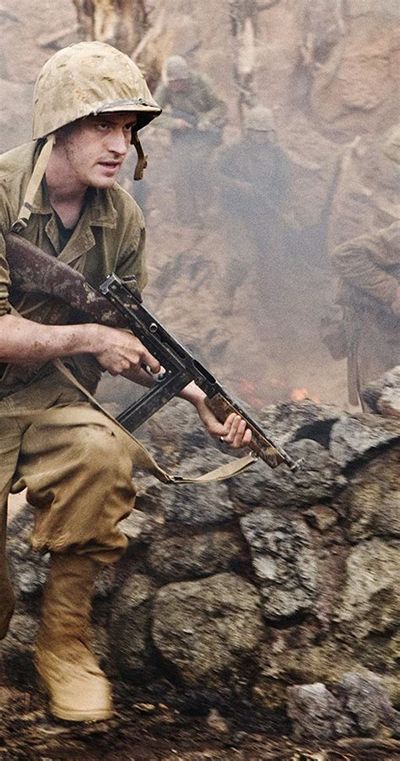 After V-J Day Leckie and Sledge return home and try to readjust to civilian life.

Frustrated with his bond selling tour, Basilone goes back to training troops and after marrying a pretty marine sergeant, leads his men at Iwo Jima.

After arduous months in Guadalcanal, exhausted marines are given rest and recreation in Melbourne, where they find the girls friendly and the beer cold.

Water is in short supply and the stifling heat takes control on Peleliu as Leckie is wounded and evacuated.

After leaving Melbourne, the weather works against the leathernecks as Lechie falls seriously ill and Sledge gets assigned to New Britain.

Outmanned and with supplies low, Basilone and other marines on Guadacanal rally to repel superior Japanese forces.

The 1st Marine Division fight a determined Japanese force on Okinawa who prefer death to surrender and are indifferent to the lives of Okinawan civilians.

Basilone’s fame keeps him in the U.S. selling war bonds, Leckie rejoins his company, and Sledge is reunited with Phillips in Pavuvu.

Veteran Sergeant John Basilone ships out soon after Pearl Harbor for Guadalcanal while other young enlistees are sent to boot camp.

Sledge finds the carnage and death of his companions on Peleilu increasingly difficult to bear as Basilone continues his bond drive in the States.