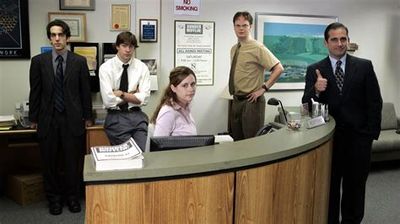 The Michael Scott Paper Company is gaining clients by offering lower prices than Dunder Mifflin, but is going broke in the process. However, Dunder Mifflin is losing clients to Michael, and is desperate to buy him out.

The Office travels to Niagara Falls to celebrate Jim and Pam’s wedding under strict orders not to mention Pam’s pregnancy. Michael, Dwight, and Andy all want to hook up with guests at the wedding and Michael and Dwight meet twins.

Michael finally finishes his movie “Threat Level Midnight” and screens it for his employees at Dunder Mifflin, but Holly is less than enthusiastic for his finished product.

Michael uses “beach day” at Dunder-Mifflin to find out which employee would be his most capable replacement, just in case he receives the promotion to the New York office that he’s applied for.

The Dunder Mifflin crew holds a casino party at the warehouse and Michael has two dates.

Michael invites Jim and Pam and Andy and Angela to a couples-only dinner party, which makes Dwight very jealous. However, the only thing he’s missing is a ringside seat to witness Michael and Jan’s extremely dysfunctional home life.

Pam is forced to deal with an embarrassing injury for Andy the night before her wedding, while Kevin deals with the loss of his dress shoes on the morning of the ceremony.

One year later, Dunder Mifflin employees past and present reunite for a panel discussion about the documentary and to attend Dwight and Angela’s wedding.

Dwight prepares for a marriage proposal and hires an assistant for his assistant, Andy auditions for a singing program, Darryl tries to leave his job without a fuss, and Pam has second thoughts about Jim staying in Scranton.

Dwight’s too-realistic fire alarm gives Stanley a heart attack. When he returns, Michael learns that he is the cause of Stanley’s stress. To remedy the situation, he forces the office to throw a roast for him.