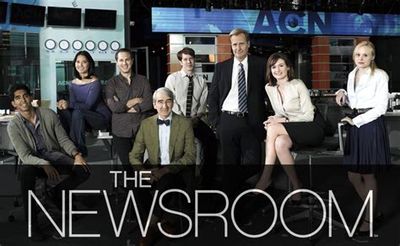 The Newsroom is a TV series starring Jeff Daniels, Emily Mortimer, and John Gallagher Jr.. A newsroom undergoes some changes in its workings and morals as a new team is brought in, bringing unexpected results for its existing news…

Will’s professional idealism is put to the test with his new news team when they are first to cover the Deep Horizon platform oil spill.

In the wake of the Genoa debacle, the team decides to use caution in reporting a major breaking story. Neal is contacted by an anonymous source in possession of stolen government documents; Sloan looks to solve a takeover puzzle.

As coverage of Election Night 2012 continues, the staff has to decide on which breaking story to pursue. Leona decides to let Reese decide. Mac and Will’s situation heads closer to the edge. And Sloan finds her anonymous bidder.

7. What Kind of Day Has It Been

The team looks forward as they mourn the loss of a coworker.

Will is in the hospital and is too discouraged to return to work as his colleagues get the final clue needed to thwart the execs wanting to fire him.

When the team attends the White House Correspondents’ Dinner in Washington, Mac makes an unexpected acquaintance and Will gets a surprise.

Will continues to defy the government by refusing to out the name of the source of the stolen documents. The team tries to make sure that the first reporter that wrote the story gets out of the middle east safely, and ACN’s new buyer’s style of news doesn’t sit well with Charlie. Sloane and Don keep dodging Human Resources, and Mac sets up a secret meeting of her own. Sloane and Charlie try to find another buyer for ACN. Jim tries to be supportive of his girlfriend’s online column.

While Rebecca must once again defend ACN during a possible lawsuit, Will tries to protect Neal from the aftermath of the DOD leak; Charlie and Leona deal with a hostile takeover; Sloan worries about Don’s involvement with insider information.

Will’s new idealism leads him to be playing into the hands of the tabloid press determined to discredit him.

In the aftermath of ACN’s Operation Genoa report, the staff who put it together face some serious blowback, not just when the government responds but also when the sources’ credibility comes into question.

Best Episodes Of Making a Murderer