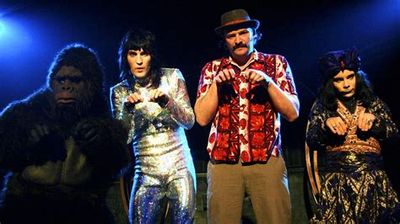 Vince and Howard meet their match, Lance Dior and Harold Boom. Only crimping can save them now.

Vince is convinced that The Human League invented music. According to Vince, Howard’s past career as a jazz trumpeter does not measure up. When Vince is offered a chance to join a new band, ‘Kraftwork Orange’ with Johnny Two Hats and the Electro Girls, he’s intent on leaving everything behind, including Howard.

8. The Strange Tale of the Crack Fox

Vince runs into the crack fox who turns out to be a nasty piece of work. Will Vince and Howard reconcile their differences in order to save the world?

7. The Nightmare of Milky Joe

Abandoned on a tropical island, feuding Vince and Howard invent a series of improbable coconut-based friends, lovers, and confidants in a vain effort to maintain their sanity, which rapidly culminates in a Hitchcock-esque dramatic ending.

Whilst Naboo and Bollo go on the head shamans stag party, Howard and Vince are left in charge of the “Nabootique”. Howard tries to sell some elbow patches and Vince gets lots of money from his celebrity radar. The Hitcher then appears demanding one thousand Euros as part of a protection racket and tells the story of how he used to go to the shop when it was a shop selling eels. He then comes back and gets shot but is then saved by a survival elbow patch stolen earlier from Howard which is bullet proof and decides not to kill Howard and Vince.

A weekend country retreat runs into trouble, when local Kodiak Joe convinces Howard he can find the elusive Yeti He requires Howard’s help to gain Vince’s affections as an exchange. The Yeti’s hypnotic rituals threaten the entire group.

Not wanting to live in the shadow of the charming adventurer Dixon Bainbridge, Howard convinces Vince to seek the Egg of Mantumbi in the dangerous tundra – the home of the demon Black Frost.

Bob Fossil has a big problem at Zoo-niverse. Ivan the bear has developed some very anti-social habits and attacks Fossil. After Naboo saves his life, Fossil arranges a place for Ivan at an Animal Offenders’ Institute. All he has to do is find a couple of idiots to drive Ivan there in the clapped-out old Zoo-niverse van. All Howard and Vince have to do is get there and back, in one piece, without falling foul of the Hitcher.

Vince and Howard attempt to impress some goth girls by stealing and using Naboo’s dark spells book. They raise one of the most horrid of demons, Nanatoo, and it’s up to them to make things right before she ransacks the city.