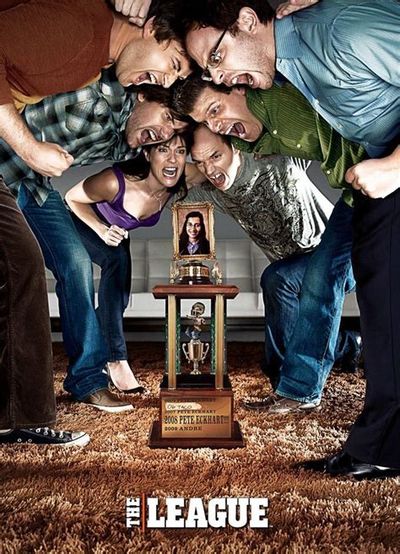 The League is a TV series starring Mark Duplass, Jonathan Lajoie, and Nick Kroll. An ensemble comedy that follows a group of old friends in a fantasy football league who care deeply about one another — so deeply that they use every…

10. The 8 Defensive Points of Hanukkah

The Shiva and The Ruxin are on the line. Andre confronts the #1 Plastic Surgeon in Chicago. Rafi tries to collect a debt from Ruxin’s sister Rebecca. TacoCorp. launches The Eskimo Brothers Database.

Andre, the League’s reigning champion, has pulled out all the stops and is hosting the draft in Las Vegas; Jenny wants to be in the League this year, and she sees her chance when a member drops out.

7. The Light of Genesis

Kevin thinks his Krav Maga instructor may actually be into him.

The League travels to Los Angeles for Andre and Trixie’s destination wedding. Ruxin refuses to do his Sacko punishments and Shiva Champion Ted has a few surprises for everyone at the draft, including JJ Watt.

Pete’s new girlfriend wants to help him with his lineup; Kevin’s past at the DA’s office has him running scared.

Kevin and Jenny discover that Kristin Cavallari is in their baby group; Taco realizes he may actually have a girlfriend; Ruxin needs Rafi to take Baby Geoffrey to swim class.

Andre and Trixie’s relationship is put to the test. Jenny and Pete make special offerings to Shiva. Rupert Ruxin (Jeff Goldblum) has a gift for his son while Taco challenges the Mall Santa.

Andre prepares for his turn as an expert witness in Ruxin’s big case but thinks Pete is trying to steal his thunder; Ruxin tries to ferret out collusion between Kevin and Jenny; Taco needs a nude portrait to impress the courtroom artist.

The Best Fantasy TV Shows from 2005