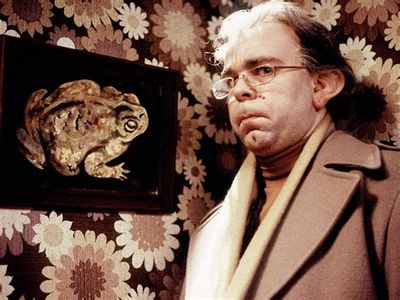 The League of Gentlemen is a TV series starring Mark Gatiss, Steve Pemberton, and Reece Shearsmith. An interweaving narrative chronicling the antics of such diverse characters as: a transgender taxi driver, a family obsessed with…

10. A Plague on Royston Vasey

Charlie and Stella baby-sit their niece Jade but frighten her with their arguing. Gary and Lynne rent a room from Pop. Edward and Tubbs decide that David should marry in order to keep the shop in the family and set a trap to catch him a wife though they trap a woman who is not local and have to let her go. Hilary Briss is displeased when Maurice wants a special for his wife Eunice as specials are for men only. Pauline and Micky, sacked from BergerMe, confront Ross at the Job Centre. An enraged Pauline ties Ross up and a siege situation develops.

Harvey and Val trick Benjamin into answering the door to the doctor by telling him that it is Nude Day but the doctor tells him it’s on the fifteenth and wonders about the lad’s sanity. Chinnery’s efforts to control a flatulent dog lead to the animal exploding whilst Iris,angry at Judee Levinson’s boasting about her life-style,reminds her that her daughter is in a psychiatric ward. Edward and Tubbs steal a Land Rover in order to find David a wife and Pop raises his tenants’ rent by ninety pounds but gives them manure to burn to keep warm in the cold flat. Geoff,Mike …

Pauline is angry when she discovers that her clients have been stealing her precious pens,with most of the anger,as usual,being directed towards Ross. Benjamin has an unpleasant breakfast-time experience when Harvey lectures him on the merits of drinking one’s own water. Chinnery tries to treat a tortoise which refuses to eat but his use of compressed air as a cure has the inevitable disastrous result whilst magistrate Maurice is not impressed by Hilary Briss’s latest tempting offer. A workman for the new road goes into the local shop and shows Tubbs an atlas. For the…

7. How the Elephant Got Its Trunk

Whilst magician Dean Tavoularis takes his magic show on the streets and Keith Harris’s dog cinema faces competition Reenie has a new helper in the charity shop – Keith Drop,to replace Vinnie Wythenshaw,who died retrieving the plastic bag that caused the crash. When Brian goes into the shop for the missing piece for his jigsaw he notices that Keith has something that belonged to his missing wife – for Keith is none other than Papa Lazarou disguised under pink make-up. He avoids Brian and Reenie’s attempts to take him prisoner and they end up,like others who have …

Now unemployed Pauline has to face the scorn of her successor Cathy Carter- Smith. Meanwhile Papa Lazarou brings his Pandemonium Circus to Royston Vasey. He has a disconcerting habit of hypnotising women and carrying them off, telling them “You’re my wife now.” A more willing volunteer to join Papa’s freak show is Barbara, who ends up fighting with the bearded lady. Unfortunately during Papa’s act the entire audience suffers from a nose bleed so he decides to leave town. Hilary Briss has refused to give a special order to Mr. Collier, who threatens to call the police …

5. The Beast of Royston Vasey

Watched by Edward through binoculars Chinnery examines the remains of the ‘Beast of Royston Vasey’ and faints at what he finds. However the beast turns out to comprise bits of animals stolen from the Roundabout Zoo, so Edward’s plan fails. To the horror of right wing vicar Bernice Woodall, Legz Akimbo, a theatre group whose motto is Put Yourself Inside a Child, arrive to perform a play about gays at the local primary school though the children are unimpressed and certain company members fall out. Having left sweets for the scarecrow in Farmer Tinsel’s field – in which…

4. The League of Gentlemen Christmas Special

Alone in the chapel of hope on Christmas Eve Reverend Bernice hates Christmas,since her mother was carried off by Papa Lazarou disguised as Santa Claus when she was a child. She has three visitors. The first is Charlie Hull,convinced from his recurring nightmare that his wife Stella is using a voodoo coven called the Solutions to stop him winning the line-dance contest. Then an old man who visited Herr Lipp and his wife in 1975 recounts the saga of Lipp’s fascination with cute young choirboy Matthew and his belief that Lipp was a vampire. Finally Chinnery comes to …

Brian is getting married to Cheryl, whom Geoff, the best man, detests. However Geoff manages to get to the end of his speech with no trouble – but then pulls a gun on the groom. Harvey and Val give the toads an honorable funeral but Benjamin, desperate to leave Royston Vasey, rings Barbara. However she has advertised in the small ads to meet a man and erroneously believes Benjamin to be her date. At Stump Hole, the caves which form the village’s tourist attraction – named after a deceased prostitute – Mike, the tour guide is still traumatised by the death of a child …

Edward and Tubbs’ son David, who has been away at college, comes into the shop and stuns them by revealing that his construction company is behind the new road-building. He is anxious to take his mother to London but when she goes to meet him she finds he looks like Edward and has’ decided’ to stay in the village. Chinnery goes to Tinsel’s farm to help a cow to calf and puts his hand up the animal’s backside. Unfortunately,with his customary incompetence, he kills it so that when Barbara arrives at hospital for her operation and finds that Chinnery is the surgeon she …

Some familiar faces return to the town of Royston Vasey, with old scores to settle and some old friends to dig up – with more bad blood than an abattoir with septicaemia.