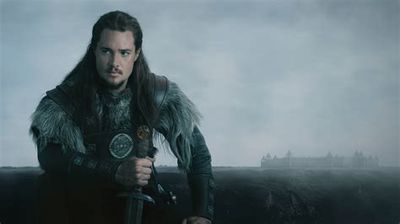 King Alfred’s health is failing. As time runs out for him to unite the kingdoms of England, his greatest warrior Uhtred must lead Wessex in battle against the fearsome Bloodhair. When Uhtred is cursed by vicious seer Skade, tragedy follows.

Uhtred suffers a great loss on his attack on Bebbanburg. As he retreats south, he takes some valuable captives. Aethelflaed prepares for war.

Uhtred turns his attention to Aethelflaed’s plight. Alfred forces Edward to face his duty. Ragnar’s army marches but traitors emerge from within.

Uhtred puts himself forward for a daring stealth mission to outflank the Danes and destroy their ships, but in the process he attracts Ubba’s attention and is challenged to a one-on-one fight to the death.

Tricked into abandoning their camp for an abortive attack on London the Saxons and Uhtred return to find it a scene of massacre with Thyra, now married to Beocca, among the few survivors and Aethelflaed captured by the Danes and taken to East Anglia as a hostage. Alfred is furious with Aethelred, to Aethelwold’s delight, and sends him to negotiate her release . At the suggestion of Odda and Aethelwold, Uhtred accompanies him. However Aethelflaed finds captor Erik far more tender towards her than her brutal husband, who is richly humiliated by the Danes and she lets …

Married by Beocca to Gisela, Uhtred joins Ragnar and Alfred’s nephew, the reluctant Aethelwold, and others including Hild and Beocca to travel north and defeat Sigefrid and Erik – and ultimately Kjarten, meeting up with Brida on the way. An early victory sends the treacherous brothers into exile and later brings Uhtred’s party to visit a contrite Guthred, who now approves the storming of Durham, and release of Ragnar’s sister, Thyra. The town is successfully captured and Ragnar faces Kjartan in single combat, a victory for justice, though Thyra does not react as hoped.

A message from Uhtred and the machinations of Skade exploit divisions among the Danes. His health failing, Alfred wrestles with Aethelwold’s fate.

Uhtred risks returning to Wessex to fulfil his vow to Brida. As the royal wedding approaches, Aethelwold spreads discord from the shadows.

As a huge battle with the Danes is close, Edward has to make pivotal decisions that will affect the fates of Uhtred, Wessex – and England.

The Worst Fantasy TV Shows from 2014

Best Episodes Of Call the Midwife