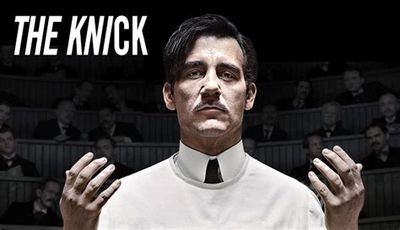 The Knick is a TV series starring André Holland, Clive Owen, and Jeremy Bobb. A look at the professional and personal lives of the staff at New York’s Knickerbocker Hospital during the early part of the twentieth century.

Cornelia tells her brother about her suspicions, Thackery is preparing to operate on Abigail, Lucy discovers some shocking news about her father, Eleanor reveals a troubling secret and Barrow goes forward with his plans with Junia.

Thackery operates on the conjoined twins, Cornelia reaches a discovery on her investigation, a hospital charity ball takes place and the operation on Garrison Carr arises trouble.

Dr. Thackery sets his sights on a return to The Knick – a request that doesn’t sit well with the board. After a shocking discovery, Cornelia enlists Cleary to do a dirty job, for a price. Bertie makes a change; Robertson pushes a new subway initiative; Barrow drives up construction costs; Lucy is surprised by an unexpected visitor from home.

A riot breaks out when a police officer is stabbed by a black man defending his wife. The employees of the Knickerbocker fight to protect the lives of blacks injured in the riots.

The Knick continues its slide into wrack and ruin, instigated by the recent riot and the cocaine shortage. Dr. Thackery is caught in a compromising position and Lucy in her efforts to help him begins her descent into possible hell as well. Dr. Thackery’s secret addiction is no longer so secret after he commits and act of desperation. Dr. Gallinger’s home life is falling to pieces and it looks like his temporary family unit has broken irretrievably apart. Cornelia is forced to turn to her black lover, Dr. Algernon, but he refuses to help her. Will the feisty nun …

5. Do You Remember Moon Flower?

Thackery and Capt. Robertson’s connection and how the doctor arrived at the Knick, are revealed; the problems between Edwards and Gallinger come to a head after a medical-board hearing about Gallinger’s vasectomies. Later, Cleary and Harriet engage in a joint business venture; Lucy shares memories with her father; Barrow realizes the rising costs of living well; and Cornelia and Henry face a family crisis.

Thackery ignores Zinberg’s advice at Mt. Sinai and undertakes a risky, alternative course of action; Cornelia confronts Henry about the family business; Barrow’s actions at the hospital construction site are called into question; Gallinger ponders a job opportunity; and Cleary steadfastly refuses to give up on Harriet.

Having lost yet another patient while performing a Cesarean section, Thackery develops a completely new method to reduce the bleeding and invites Bertie Chickering to help him experiment. Their new method works quite well. The Gallinger’s baby is in hospital but declining rapidly. At the funeral, Mrs. Gallinger refuses to accept her daughter’s death. Cornelia and Speight are making progress in tracking down the source of the typhoid outbreak and focus on Mary Mallon who made peach Melba for all those who fell sick. Barrow tries out a second hand x-ray machine and buys…

Faced with a quandary, Bertie decides to take matters into his own hands at Mt. Sinai, enlisting Algernon to help. Thackery investigates the efficacy of hypnosis, and takes an interest in a pair of conjoined twins. Lucy lobbies Henry for a gala invitation. Cornelia visits the brother of a deceased immigrant with ties to Speight. Gallinger dines with an unwelcome guest. Barrow previews a new home for Junia. Harriet agrees to make a change.

Thackery’s drug habit is catching up with him. He is growing increasingly paranoid as he is unable to perform even when under the drug’s influence. When he learns that Dr. Levi Zinberg is studying the properties of blood so that it can be typed and safely transfused, he sets out to find a solution before him. It leads to tragedy however. Cornelia is determined to terminate her pregnancy and is shocked when Cleary collects her and by the identity of the abortionist. It means the end of her relationship with Algie and she decides to proceed with her wedding. Algie deals…

Best Episodes Of The Bachelor

The Worst Fantasy TV Shows from 2014