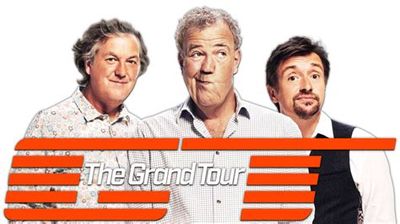 The tent is once again in Loch Ness, This time Jeremy, Richard and James test the Jaguar F-Pace, the Bentley Bentayga and the Range Rover Autobiography with a road trip around central Europe.

The boys attempt to break the British water speed record for amphibious cars and the guests of the show are Dynamo and Penn and Teller.

8. Past, Present or Future

The guys are in Switzerland where they engage in a battle of the past, the present and the future. Ricky Wilson and David Hasselhoff star in the all-new Celebrity Face-off.

Jeremy Clarkson, Richard Hammond and James May set out to prove that old Jaguars are not only stylish and roguish, but also strong and reliable with a road trip across Colorado. Along the way they set laps around a punishing dirt track and test 0-100-0 performance at America’s highest commercial airport before embarking on one of the most perilous challenges they’ve ever attempting; avoiding the expense of lift passes and ski equipment by going skiing in their cars. Alsoin this show, Celebrity Face Off finds the world’s fastest actor whose middle name is George by …

6. Blasts from the Past

Jeremy Clarkson and Richard Hammond tour Europe in brand new British sports cars built to designs from the 1950s, an undertaking spoilt by the arrival of James May in a modern Honda Civic Type R. Back in the UK, Jeremy is at the track to test the Ford GT, and Celebrity Face Off sees Stewart Copeland from The Police go head-to-head against Pink Floyd’s Nick Mason in a battle of the drummers.

In a special episode of the show, Clarkson, Hammond and May clatter across Colombia in a Jeep Wrangler, a Chevrolet Silverado pick-up, and a Fiat Panda 4×4.

Richard and James work out that the average motorist loses 36 days of their lives filling up with fuel. The pair vow to do something about it, using their skill and ingenuity to invent a system for filling up on the move.

For the final show of the season, the Grand Tour tent arrives in Dubai from where Jeremy Clarkson and James May introduce a battle between their own, personal cars. Jeremy champions the past with his Volkswagen Golf GTI while James makes a case for the future with his electrically powered BMW i3. Meanwhile, Richard Hammond is in France learning how to drift a car like a pro, and James is sent to a damp part of England to take part, against his will, in a strange sport called winching. Plus, the recently deceased Bugatti Veyron takes part in a drag race against the …

In the second show of a two-part special, Jeremy Clarkson, Richard Hammond and James May continue in their epic trip across Namibia as they attempt to prove that beach buggies are brilliant. Having escaped the challenging desert at last, the trio must now face the rough roads of the Namibian bush and the constant malfunction of Clarkson’s V8-powered buggy. As their arduous journey nears its conclusion, the hosts camp out in style and embark on their own version of rhino conservation before coming up with an unusual and potentially perilous way to reach their finish …

1. The Mongolia Special-Survival of the Fattest

Jeremy Clarkson, Richard Hammond and James May are dropped in the vast wilderness of Mongolia and told to await a delivery.

Best Episodes Of Greatest Events of WWII in Colour