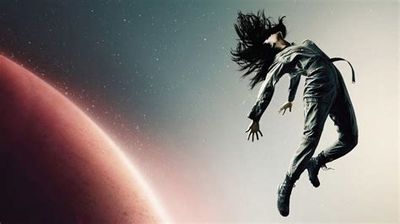 In the final episode of this season, the crew of the Rocinante comes face to face with an evolving intelligence infused with the alien protomatter.

The Rocinante tends to wounded Martian soldiers in exchange for supplies; Avasarala struggles with how to disseminate a key piece of evidence despite being in hiding.

The Rocinante answers an unexpected distress signal. Bobbie and Avasarala find themselves being hunted by a mysterious captor. UN Secretary-General Sorrento-Gillis brings in a colleague from his past to lend an ear during this crucial time of war.

Naomi comes face to face with Filip. Holden and Fred turn the tables. Avasarala closes in on Marco’s plot.

The final battle between Earth and Mars threatens the very future of humanity; a new monster is unleashed on Prospero Station; Anna receives the smoking gun she needs.

The asteroid Eros takes direct collision course towards Earth. The Rocinante chases it. As last defense Earth launches missiles against Eros. Miller went inside Eros and makes a surprising discovery.

Holden and Miller race to save Ilus. Murtry puts his endgame into motion, putting the Roci crew’s lives at risk.

Miller devises a dangerous plan to eradicate what’s left of the protomolecule on Eros.

The search for Prax’s daughter comes to a head; officers loyal to Admiral Souther plan to mutiny aboard the Agatha King.

The Best Animation/Cartoon Series from 1994