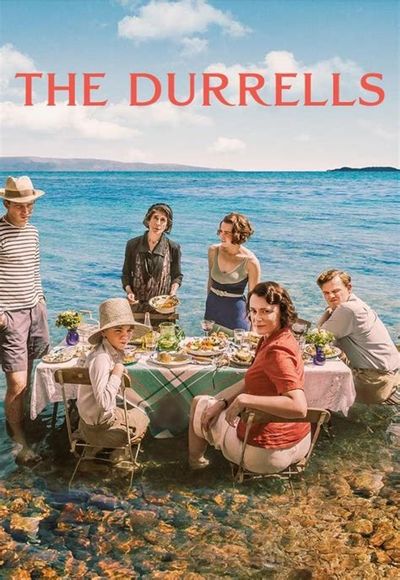 The Durrells is a TV series starring Keeley Hawes, Josh O’Connor, and Milo Parker. Based on the real-life events of the Durrell family as they resettle from England to Greece.

Margo takes great pride in her new job at the surgery, but realises where her greatest talent lies. Louisa wonders if she’s made a mistake bringing her family to Corfu when Gerry befriends a convict.

Louisa throws a party for Gerry’s thirteenth birthday but it is a staid affair and Gerry does not appreciate the children’s games, railing at his mother before storming out. Spiros is also unhappy as his wife has left him and Dr Petrides is fed up with the guests demanding he diagnoses their ailments. Larry livens matters up with a conga and, despite a mosquito infestation, the evening ends on a reconciliatory note.

Louisa has opened the doors of the villa as a boarding house and Basil and two Australian dancers have become official guests. To save money, the girls instantly move into Larry’s room – much to his delight – but it’s soon clear that Basil has become the most persnickety guest ever. The family warm to mysterious new guest Lazaros Vangelatos. Meanwhile, Gerry acquires a new pet in the form of Ulysses the owl and proclaims he is going to open a zoo and feeling she needs more from her life, Margo embarks on a new project to work as a hairdresser.

In 1935, beleaguered Bournemouth mother Louisa Durrell decides to uproot her problematic family and build a new life on the Greek island of Corfu. However, they soon find that island life presents its own problems.

The King of Greece is to visit Corfu and the Durrells are keen to be part of the welcoming committee. Meanwhile, things between Spiros and Louisa get cozy.

After Larry discovers Aunt Hermione has died in her sleep she is given a bizarre memorial service organized by Margo before Louisa and Larry escort the body back to England. Leslie is shocked to learn that he has impregnated Daphne, one of his former girlfriends, and makes a compromise when her father demands a shotgun wedding though Margo finds herself succumbing to the persistent Zoltan.

Leslie is accused of armed robbery, forcing Louisa to take drastic action to save him. Margo takes a shine to a gardener at the Villa and the family realise the extent of Gerry’s passion for animals.

Louisa is a little alarmed by the arrival on nudist author Henry Miller on the island and concerned for Spiros, who is neglecting himself,. She determines to bring him out of his self-imposed isolation. The whole family is outraged when Sven is imprisoned for homosexuality but Louisa devises a way to free him before cousin Basil turns up with less than good news about Aunt Hermione’s will.

With storm clouds gathering, the island realises it can no longer ignore the rumblings of war just as it looks as though the Durrells may have found their happy ending.

Wanting to avoid his depressingly empty house, Spiros spends most of his time at the Durrells’ home. Louisa is not complaining, she just wants him to be happy and the two become closer. In the town, Larry meets Elena, a beautiful, exotic young woman who, along with her friend, the bearded woman, happen to be part of the travelling circus. Elena reveals she is a contortionist and after she performs some of her moves, Larry falls quickly in love. Keen to get involved, Louisa and Spiros help the circus drum up business whilst Margo starts to rehearse a very risky act and…

The Worst Laugh Out Loud TV Shows from 2003