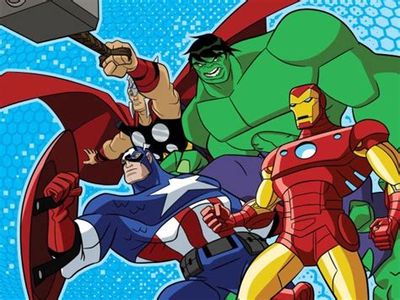 While playing host to the Fantastic Four at Avengers Mansion, the Avengers find themselves under attack by Doctor Doom’s forces.

When Ultron-5 goes out of control and kidnaps Wasp, things go crazy when the droid kills Thor with his lasers.

While dealing with the Red Skull’s escape with his Sleeper robots, Captain America also investigates the villain’s former henchman who seems disturbingly familiar.

The newly-formed Avengers face the seemingly limitless power of Graviton, but only the Hulk may be capable of stopping him.

Despite Thor going missing and Captain America ending up in the hospital, the Avengers must stop Ultron from eliminating the world’s most flawed creatures-humanity.

It’s up to Hawkeye, the Hulk, and Thor to save the day when the Leader’s gamma radiation ray mutates the rest of the Avengers and threatens to do the same to every human on earth.

The Avengers and their allies face the ultimate test when Galactus, the Devourer of Planets comes to consume Earth.

The Avengers board Kang’s command ship in order to put an end to his invasion of Earth.

The Skrull Empire initiates their seizure of Earth and the Avengers are hard pressed to thwart it.

1. A Day Unlike Any Other

Eight of the nine realms of Asgard have fallen, only the Earth remains. The Avengers are all that stands between Loki and total conquest.