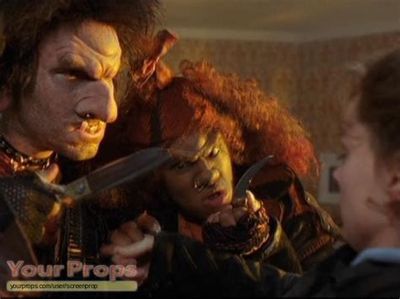 Virginia and Tony are in the dungeon of Prince Wendell Castle, and Virginia is devastated by her mother’s actions. The Evil Queen plans to kill all the guests at the coronation ball and Wolf is helping her. Queen Cinderella makes an appearance and questions the false Wendell. Virginia has to confront the Evil Queen and her emotions to retrieve his mother.

Virginia hides from the Troll kids at her grandma’s, while Tony is busy with his new servants. The Trolls are still trapped in the broken elevator, and they are trying to find a way to break “the spell” they think Virginia cast on them. Wolf tries to eat Virginia’s Grandma but decides he can’t when he meets Virginia. She escapes with Prince by pushing him through a window. Then he visits a shrink to try and decide if he is in love with Virginia or if he just wants to eat her.

In New York, the lonely waitress Virginia Lewis lives in a building on the edge of the Central Park where her father Tony Lewis is the janitor. Meanwhile, in the Snow White Memorial Prison, Relish the Troll King wears a pair of magic boots to become invisible and release his sons Blabberwort the Troll, Burly the Troll and Blue Bell the Troll. When they are leaving the prison, they are summoned by the Evil Queen that offers half of the 4th Kingdom to Relish if he helps her. When Prince Wendell arrives for a visit in the prison, the Evil Queen uses a magic dog and the …

The journey continues and the team now travels in a boat trying to find Acorn the Dwarf that has the Magic Traveling Mirror. When they reach River Town, Acorn the Dwarf has already left and has gone through The Disenchanted Forest. Prince found his body, but in search for help, he ends soon escaping from the the Kid Trolls, Tony tries to help, but accidentally turns all them into a golden statue. They continue traveling through The Disenchanted Forest but the Evil Queen’s Huntsman follows them. Gypsies give them shelter for the night.

The Troll kids are taking an unconscious Virginia to their kingdom to torture her, meanwhile Tony must find a way to escape the Snow White Memorial prison. News about the Evil Queen’s prison break is all around the nine kingdoms. The Evil Queen rides undetected in Prince Wendell’s coach with the false prince. Wolf realizes he loves Virginia, and he becomes determined to help her escape the Trolls and reunite her with her father.

The Evil Queen’s Huntsman has captured Virginia. The queen sends a letter to Prince Wendell’s council explaining that The Prince had an injury and he is staying in his Hunting lodge to recover. In the meantime, Tony and Wolf are looking for a Magic Axe that will break a curse cast on Virginia’s hair. With the help of the magic birds, they can knock down the Huntsman and they finally find Acorn the Dwarf. But the mirror was sold, and Virginia, Tony and Wolf must go to the Little Lamb Village to find it.

The Trolls, now teamed up with the Huntsman, have captured Virginia, Tony and Prince. Meanwhile, The Evil Queen prepares the false Wendell’s coronation. Tony and Virginia manage to escape, but Prince is left behind. On their way to Wendell’s castle to stop the coronation, they decide to take a shortcut through the Deadly Swamp. There, Virginia finds the body of “The Swamp Witch” (Snow White’s evil stepmother.) Tony eats some magic singing mushrooms and drinks the swamp water, and Virginia joins him. The mushrooms and swamp water make them fall into a dream filled …

The team reaches Kissing Town, the place where Snow White was saved from her deadly sleep by a prince’s kiss. They all begin gambling to get enough money to buy The Mirror from an auction house. Wolf hits a jackpot but decided to win Virginia’s love, he spends all of his money on a Singing Engagement Ring and other presents for Virginia. The Huntsman outbids them at the auction and then blackmails Tony. If Tony doesn’t give him the Prince he will smash the mirror. Virginia is mad at Wolf for lying so she turns his proposal down. Tony comes out with a plan to get the …

Driven by the moon influence, Wolf kills some of the Peep’s chickens. Virginia ties him up so he won’t hurt anyone or anything else. Tony makes Virginia sign up for “The Best Sheep and Shepherdess” contest to win The Mirror. Virginia wins but Wolf is convicted for the murder of Sally Peep. Virginia decides not to go home just yet but to stay and help prove his innocence. Tony uncovers the truth about the Magic Wishing Well but in the lost time the mirror is gone again.

On the back of the broken mirror Tony and Virginia find an inscription “Manufactured by the Dwarves of Dragon Mountain” so they decide to go to there hoping to find another mirror that could bring them back home. In the mountain, they meet dwarves who inform them that three Traveling Mirrors were made. The only one left is in possession of the Evil Queen. Tony’s bad luck causes him to break all the magic mirrors. The dwarves become angry and chase them so Virginia and Tony run to deeper into the mountain to escape. Tony’s bad luck strikes again and he breaks his back….