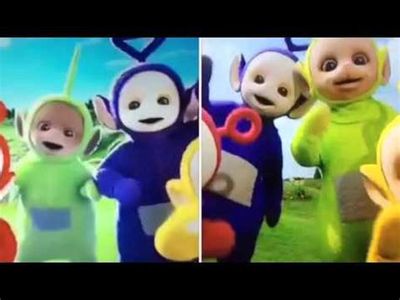 Po & Laa-Laa burst out of the house for a Big Hug and then watch a group of children act out their story of a journey. Tinky Winky, Dipsy and Laa-Laa wondered where Po was so they went to look. Laa-Laa finds Po lying asleep under a big tree. Laa-Laa tells Tinky Winky and Dipsy the story of Po and then they all go to see her.

The Teletubbies sing Good Morning to everyone they meet.

The Teletubbies watch some children playing in their paddling pool.

Teletubbies Original: The Teletubbies dance an up and down dance. They watch some children painting pictures and patterns on to eggs. In Teletubbyland, Laa-Laa dances with her ball until the magical tree appears.

Teletubbies Original: The Tubbies love to run round and round Teletubbyland, but they stop to watch three children make some modelling dough to play with.

Teletubbies Original: A magic watering can appears in Teletubbyland, and Po has fun watering everything and watching them grow. The Teletubbies watch two children make ice cream sundaes with jelly, ice cream, and other nice foods.

The Teletubbies dance a walking dance. They stop to watch a group of children riding on a rickshaw. In Teletubbyland, Po is riding her scooter. She rides faster and faster. Po rides so fast, she flew up into the sky. Po flew over the trees. Tinky Winky, Dipsy and Laa-Laa wondered where Po was. They’re very surprised to see him fly over their heads.

Best Episodes Of Dora the Explorer

The Best Animation/Cartoon Series from 1994