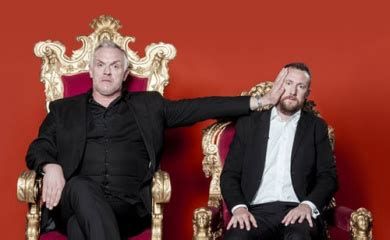 Taskmaster is a TV series starring Greg Davies, Alex Horne, and Kerry Godliman. Five comedians are set tasks challenging their creativity and wit. The tasks are supervised by Alex Horne but the Taskmaster, Greg Davies, always has…

A round of mini-golf using eggs, picking blue sweets out using boxing gloves and making a meal using ingredients representing each letter of the alphabet are among the challenges in the series finale.

Comedians get competitive as devious Greg Davies sets them absurd challenges. Identifying pie contents and making a film backwards are on the agenda here.

8. Hollowing Out a Baguette

Taskmaster Greg Davies tries to spot the five camouflaged comedians before they try to herd dogs and chickens. They also have to re-home a fish and create a trailer for Taskmaster: The Movie.

The guests have to get four items of clothing as far away as possible, along with other equally ridiculous tasks.

6. Butter in the Microwave

Jo and David have time to stop for a sandwich while Ed, Rose and Katy are stuck in a loop.

The guests take on more ridiculous tasks, whilst Al Murray is convinced urine and sweat are the same thing.

4. The Dong and the Gong

The guests have to put the ‘heaviest’ item they can find into a shoe box, along with other nonsensical tasks. Al Murray’s Morse code knowledge lets him down.

1. I Can Hear It Gooping

The series reaches its majestic climax. Who will win Greg Davies’s coveted golden head to become just the seventh Taskmaster Champion in history?

The Worst Mystery Series from 2006