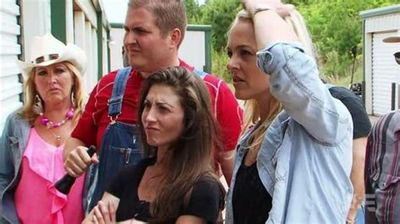 The Gambler returns to form in Huntington Beach, as Rene gets on everyone’s bad side; Mary finds her likeness lucrative, while Ivy’s prospects are cloudy at best.

The Vegas Ladies show up in “Bourgie Brea,” and find the place fascinating. Mary decides to deal with her storage stress by introducing a bit of yoga into her routine. Ivy and Dave go head-to-head on a giant pair of sister lockers, but Dave chooses to sit out the rest of the time.

Out in West Covina, Rene brings Gunther for moral support but gets annoyed when the older German won’t take sides.

Back in Torrance, Mary dabbles with Dave’s dark arts, while Kenny takes some excavation lessons. Brandi & Jarrod quit horsing around long enough to stumble across a wartime oddity.

6. Goat Tell It on the Mountain

The buyers try to get away from it all, heading out to Lake Arrowhead, where Ivy puts economies of scale to the test. Justin almost hits the bullseye on his locker, while Darrell and Chad’s fortunes are found on the farm.

This time in Victorville, Ivy takes it easy, letting Ivy, Jr. run the operation. Kenny feels run down and his lack of focus lands him a locker, though there’s a pleasant surprise in the end. Mary, Shana and Edwina just can’t seem to make anything stick, so they decide to embrace it, doing what they do best.

In Hawaiian Gardens, Darrell breaks in the new guy. Brandi and Jarrod detect something mysterious in their unit; Justin paws his way through a decent locker.

In Riverside, Kenny gets baited into bidding on a massive locker; Rene and Casey try to go small and end up churning out a few bucks, while Shana and Edwina’s mystery box is mislabeled.

Rene steals the units in Rancho Palos Verdes. Mary’s locker reveals a sticky past, while Justin shows that he can turn a small investment into a big return.

It’s “prison” hugs all around in the City of Orange. Brandi and Jarrod bring an old friend along to do the heavy lifting. Ivy finds his fun in the little things. Amidst all the water damage, Mary discovers where her bread is really buttered. Shana & Edwina crack themselves up with some snappy accessories.

The Worst Animation/Cartoon Series from 2014