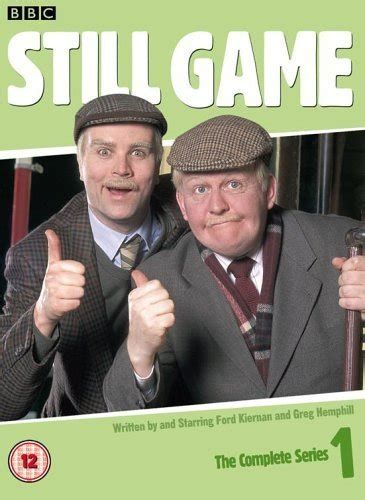 Still Game is a TV series starring Ford Kiernan, Greg Hemphill, and Paul Riley. Cult Scottish comedy about the lives of two OAP’s Jack and Victor and their views on how it used to be in the old days and how bad it is now in the…

A truck ploughs into the electricity sub-station, causing a power cut. Navid’s shelves are empty due to panic buying and the pumps are off in the pub. Worse, a robber is taking advantage of the situation, burgling Isa’s flat. The police arrive but they may not be what they seem. Fortunately Winston is about to ride to the rescue.

Isa’s husband Harry Drennan re-appears and, as she wants none of him, she gets Winston to pretend to be her boyfriend. Whilst Victor and his son have little in common Jack gets a tape from his daughter Fiona in Canada showing the family, and with it an invitation to go out and see her. Can Jack leave his old pal to fend for himself in Craiglang? Or, perhaps they could both go?

Back from Canada, life in Craiglang seems really mundane to Jack and Victor, who consider taking up a hobby, such as enrolling for the First Aid Course at Glasgow University’s night school. Boabby has troubles of his own. His custom is dwindling and he can’t get his leg over. However, things could change when he brings in a pretty new barmaid and has a quiz night. Armed with their new-found knowledge Victor and Jack are determined to be the quiz champions.

To celebrate sixty years of friendship Jack and Victor go out for a meal but it costs the Earth and prompts them to lament the passing of the good old days. As it happens these are being celebrated in an exhibition at the city museum,dedicated to the Glasgow of their boyhood. Whilst there, they meet an old friend Frank McCallum, but he has certainly changed since they last saw him.

Jack and Victor have crossed the Big Pond to stay with Fiona and are taking in all the tourist attractions – as well as the tacky souvenirs. With such an improved life-style why would anybody want to return to dreary old Craiglang? Where Winston has now got his feet under the table at Isa’s. Her cooking is superb but he finds her incessant talking less palatable.

Revenge is sweet for Winston when he exposes the new bookie Frankie Reid, supposedly the elder brother of his old adversary Stevie, as Stevie himself and, thanks to personal tips from pundit John McCririck via the T.V. set, takes him to the cleaners, though his triumph is short-lived. Jack and Victor win a free tour of a local whiskey distillery where they bend the rules and get thrown out – but with a valuable souvenir.

A particularly cold snap envelops Craiglang. People are slipping on the ice and, worse, dying of hypothermia. Winston has the perfect solution, to fiddle the electricity and get free heat. Victor is appalled at this display of criminality. But then it is very cold and needs must. . .

Craiglang is hit by two notable events – the first is Tam’s sudden bout of generosity, though it quickly evaporates. More alarming is the presence of Hyperdales, the huge hyper-market which threatens to put an end to Navid’s shop. He plans to sabotage it by committing arson after it has shut for the night. Tam, Winston, Jack and Victor try to dissuade him but . . .accidents will happen.

Jack and Victor face a miserable New Year when they become trapped in a lift at Osprey Heights. Winston recalls the daddy of all Hogmanays, in the dim and distant past when Craiglang knew how to throw a party.