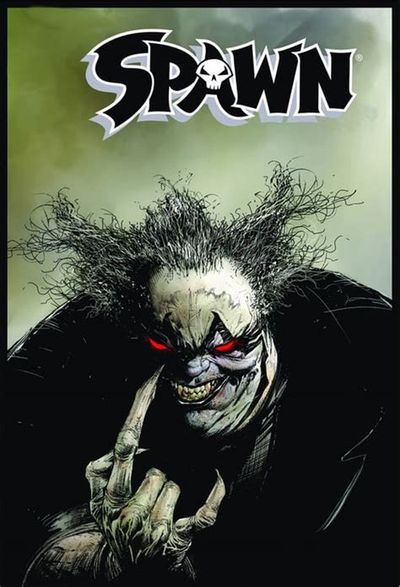 Pilot episode of this adults-only animated series about a CIA hit man whose death causes him to seal a deal with the devil. But the devil transforms him into ‘hell spawn,’ a dark warrior who battles the forces of evil on the earth–and in himself.

Spawn wins the respect of the derelicts who live in the alley, while seeking the counsel of sage Cogliostro.

Spawn has flashbacks of himself as Al Simmons sent downriver to capture the renegade Major Forsberg–guardian of the war mask of Ghengis Khan which contains the powers of Hell.

In the series finale, Twitch remembers that Chief Banks shot him. Jade reveals there is a bounty on her head. Two new Celestial Warriors appear and battle Spawn and Jade. Spawn comes to realize his powers need not be used for evil.

In the Season Two premiere, Spawn’s nightmares reveal that Al Simmons’ killer was his mercenary ex-partner, Chapel. CIA chief Jason Wynn tells Chapel to find a cache of stolen guns before they are uncovered and traced back to him.

5. Souls in the Balance

A psycho, grenade-toting preacher named Cain holds a mute boy hostage, threatening to blow up anyone who gets in his way. Spawn is indifferent at first, but is pressed into action when a cop intimidates one of the alley bums.

The Season One finale of this adults-only animated series about a superhero who battles the forces of evil on Earth–and in himself–to uncover the truth about his identity and fulfill his destiny.

Spawn is tormented by nightmares of a Medieval Black Knight hunting him and demanding that he acknowledge which Master he serves. A mysterious prisoner is introduced; we find he is being held by Jason Wynn.

A hired cyborg ominously named Overkill engages Spawn in battle in the alley, forcing Spawn to retrieve some of Al Simmons’s old ‘tools of his trade’ from a guarded CIA weapons compound.

Twitch is assigned to the Spawn case. In his research Twitch confronts the Spawn in the alley as well as the reporter Lisa Wu. Unfortunately his exploits do not go unnoticed.

The Worst Action Shows ever broadcast...

Best Episodes Of The Exorcist