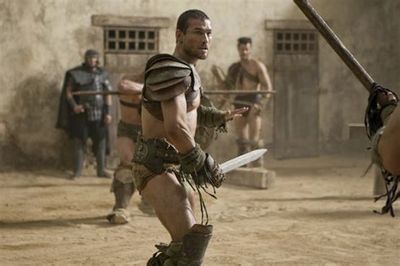 Glaber arrives at Capua to meet Batiatus and discuss the terms of support the house, but he wants to see the legend of Spartacus fighting before he makes his final decision. But that event leads to an important twist leaded by Crixus, which may affect all the intentions of Batiatus.

Tiberius seems a bitter, broken boy, having had to beat his comrade Sabinus to death, lashing out at surviving true cowards. Father Marcus Crassus sends his mistress to coax his heir with wine and tenderness, but the knave chooses to rape the ‘mere’ slave by way of compensation. Senator Metellus is ignored when he rudely inquires why the army hasn’t moved on Sinuessa, but will soon see. Spartacus tests Cricus’ loyal patience to breaking point by leaving him behind during raids on Crassus’s food supplies, announces he’s sailing on Heracleo’s ships to Sicily and …

Numerious, the Magistrate’s son, is about to celebrate his birthday and the celebration will be at the house of Batiatus, so he decides to have Crixus and Spartacus facing each other in a demonstration battle. But when Ilithyia approaches Numerious, he changes his decision drastically.

An epic battle between Spartacus and his gladiator brothers, against Batiatus and his Guards.

Spartacus and the rebels arrive at a crossroads. With the relentless Crassus driving his men hard in the pursuit of Spartacus, the conflict between Tiberius and Caesar escalates.

Spartacus realizes his ethnically divided troop is neglecting its defense, proves it with a mock Roman surprise attack on the temple ruin and finds a way to get his men training and bonding, through competition and wine. Unexpectedly, Varinius arrives to ‘relieve Glaber’ just when Ashur has located Spartacus’s lair. Ilythia informs Seppia that Glaber had her brother murdered to turn her rival into a weapon against him, but at the last moment saves and apparently reconciles with her startled husband.

Spartacus leads a bold mission to free Crixus from Roman captivity, but a storied gladiator from the House of Batiatus complicates matters. Ilithyia’s scheming puts her marriage to Glaber at risk.

3. The Dead and the Dying

Crassus learns that a fellow prominent Roman is attempting to steal the glory of defeating Spartacus. Spartacus looks for a bargaining chip he can use against the Romans.

Spartacus and Crixus face an undefeated giant gladiator. If they don’t overcome their hatred for one another and work as a team, he will kill them both.

1. Wrath of the Gods

Spartacus and a few surviving people are trapped on top of the Vesuvius volcano. Glaber and Ashur guard the entrance.