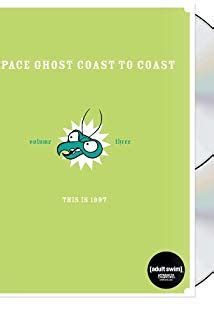 Space Ghost presents a tribute: “Women In the Entertainment Industry”. His plans are foiled when Zorak and Moltar hijack the show and present their own tribute to Jack Klugman.

Space Ghost’s wrestling granddad, Grandpa Ghostal, visits the set and gets in a fight with Zorak.

There’s a wacky fun slippery slide in the studio.

7. Yorke and Björk in: Knifin’ Around

Space Ghost gets hungry while interviewing guests Michael Stipe and Lassie, so he orders a pizza. However, Mujibur Rahman and Sirajul Islam receive his pizza instead and refuse to share.

5. Live at the Fillmore

Space Ghost ends up in jail again, so Zorak and Moltar bail him out with the show’s budget – again.

Space Ghost tries a miracle shampoo that is supposed to both grow hair and improve his brain power. However, it’s merely a placebo and it causes limbs to fall off. Bob Costas is interviewed.

Moltar has been kidnapped by Your Mother and holds him ransom for Space Ghost’s power bands. Space Ghost and Zorak (in his alter-ego form of Batmantis) try to rescue him. However, it’s revealed to be just a dream.

Space Ghost and Zorak temporarily become roommates, but Space Ghost quickly becomes disgusted with the situation. Space Ghost fires Tansut as the opening announcer. Space Ghost’s pet/balloon BooBooKitty floats towards a giant pin on The Ghost Planet and pops. Space Ghost gets a porpoise as a new pet.

Space Ghost interviews Conan O’Brien, who is thoroughly unimpressed with Space Ghost’s interviewing skills, particularly when Space Ghost decides he’d rather follow a fire ant (which bit him) back to its family than continue the interview.