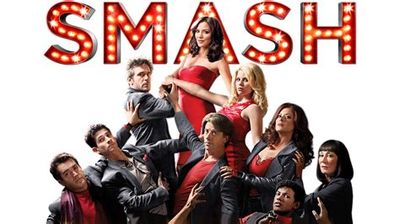 Smash is a TV series starring Debra Messing, Jack Davenport, and Katharine McPhee. More drama occurs behind the scenes than on stage, as the team prepares an ambitious Broadway musical on the life of Marilyn Monroe.

Karen and Jimmy’s first night together is cut short by the arrival of her father, in town for a conference. Beyond believing that Karen is in a sexual relationship with Derek, he can’t get over the fact that she left “Bombshell”, a Broadway show, for experimental theater. His demeanor toward Karen and the men in her life is based on this perspective. Specifically with Jimmy, he may not be able to outrun his past, which he’d rather forget, as he becomes more famous. Meanwhile, Ivy is having parent issues of her own, with her Broadway diva mother, Leigh Conroy, coming …

Despite “Bombshell” not getting the ticket sales they were hoping, Eileen and Agnes are certain they are still on track for the show to sweep the Tonys. They just have to keep the show open until the awards, so they drum up whatever publicity they can featuring Ivy at whatever opportunity. One of those publicity items – Ivy moderating a Q&A session with Tom and Julia – may be bad timing. Tom has found out that he didn’t get the “City of Angels” directing job. His belief that he would then work on “The Great Gatsby: The Musical” with Julia doesn’t seem to be in the …

In the lead up to showing the workshop to potential investors, things don’t seem to be going well for anyone involved with the show except Karen, whose biggest issue is if her allegiances lie with the show or furthering her music career, as a big time music producer, who only has a limited time to see her, can only do so during the investor’s show. Eileen is having problems with the building manager and getting the boiler repaired in time for the show as the building is like a furnace. Eileen gets some help on this matter from an unexpected source, which may add a …

Personal relations between Tom and Ivy are still strained, into which Ivy brings the cast onto her side. Wanting to mend their friendship, Tom, at the last minute as he reminded of the date, asks his friend and Ivy’s idol Liza Minnelli to provide a surprise to Ivy for her birthday later that evening. Beyond Ivy already having made arrangements with her cast mates to celebrate her birthday without Tom, the evening has the potential to be a disaster for all concerned, which includes Eileen and Richard, who are testing the waters of a personal relationship. Meanwhile, Jimmy and Karen…

After a successful run in Boston with Karen in the lead, “Bombshell” seems destined for Broadway, making Karen a Broadway superstar. As such, Karen is now part of the show’s power team, and, based on advice she gets from Broadway star Veronica Moore, she can make whatever requests she wants to protect the material. Despite most of the cast and crew being automatically rehired for the Broadway run, Karen has the power to dismiss Ivy, who not only tried whatever she could to thwart Karen’s success, but was also the reason for her break up with Dev. Ivy, in turn, does …

It’s “Bombshell”‘s opening night, to which Eileen has provided tickets to the cast and crew of “Hit List”. While trying to avoid any on-line chatter leading up to the opening, Ivy can’t help but be affected by one comment that she is only a chorus girl not up to a starring role. Karen, on the other hand, isn’t sure if she wants to see someone perform the role she voluntarily gave up. And even before the opening, Tom and Julia contemplate their next move, which may or may not be together as a team. Much of what happens will depend on the reviews, the Times’ which may …

Both “Bombshell” and “Hit List” have important upcoming full run throughs. “Bombshell” is doing a “friends and family” performance before going into its first preview the following day, which coincides with “Hit List” doing a run through the same day for Richard Francis, who plans to write an article on the show. A multitude of technical problems in the “Bombshell” “friends and family” performance may end up delaying the first preview show, which Tom wants to avoid at all cost as he sees a delay in preview as a public declaration of failure. Tom does whatever he needs…

“Bombshell” and “Hit List” lead the Tony nominations with twelve and thirteen nominations respectively. Some things seem a certainty at tonight’s awards ceremony, primarily that Derek, who has three individual nominations, will win nothing as he is now seen as persona non grata by the Broadway community after his public announcement of his casting couch process, the latest which led to Ana’s firing and Daisy’s hiring, and that he will not attend the ceremony. Since he made that announcement, he has been in hiding in his apartment, with none of his closest confidantes …

Despite their respective roles in the production, the seeming battle between Ivy and Karen continues into the workshop. Ivy is mad since she wasn’t told previously that Karen would be in the ensemble. Ivy, despite or because she knows Karen is talented, does whatever she can to ensure that Karen gets as little work in the background as possible. Karen is mad as she learns that Ivy and Derek are in a sexual relationship, something she knows she could have had with Derek if she wanted, and something she knows got Ivy the part regardless of talent. She is also mad …

The teams and individuals at both “Bombshell” and “Hit List” are going about their regular routines, both with regard to their respective shows and with their interpersonal relationships. This business includes Tom taking legal measures to dissolve his partnership with Julia, much to her ire, and Karen contemplating beginning a sexual relationship with Derek following her fall-out with Jimmy. But all comes to a screeching halt with the news of Kyle’s death, he who was struck by a car. The team at “Hit List” is particularly hard hit by the news. The one person who …