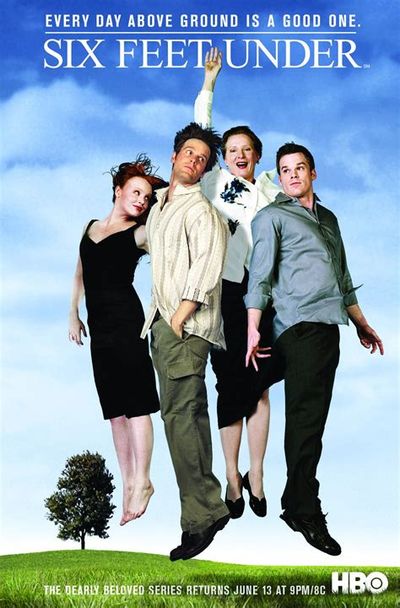 A gay couple is attacked and one of them is killed, causing controversy among the family and a confession to be made.

Iraqi War veteran Paul Ronald Duncan receives a euthanasia in the hospital – and Claire, on drugs, takes out her own loss on the family by denouncing the war in general but also them for letting their son serve. Later, after several days of drinking, she is fired and fights Ted for taking her keys, then later crashes her car by trying to avoid hitting a deer when going to visit the family’s newest grave. David can’t find a way to express his feelings so colorfully, so is still plagued by nightmares and daydreams 6 weeks after the funeral, mostly involving an …

George’s infatuation with impending disaster is causing him nightmares. His daughter Maggie joins him and Ruth for dinner and she has a lot of stories about her dad. Later, Ruth is quite concerned when she finds George talking by himself to an imaginary person. Claire’s showing of her work is a huge success but she ignores her friends in the process. Nate is stressing over Barb’s threat to take Maya away from him. He learns more about the circumstances of Lisa’s death, leading to another tragedy. David hopes that if he faces his attacker, who is now in prison, he will…

Although their earlier visit did not go very well, Ruth suggests they invite George’s estranged son Kyle for dinner. She’s also thinking of inviting a friend of hers and introduce them. Nate goes to a grief management class but has trouble relating to the other participants. At the funeral home, Rico and Dave console Anne Thornton’s husband who blames himself for his wife’s death. Claire doesn’t react well to criticism of her self-portraiture photos. David picks up an apparently stranded motorist but it all turns nightmarish for him.

The Diazes’ friend and former neighbor Leticia Perfecta Perez dies in her sleep at a beauty parlor and leaves his family a large sum of money, causing Rico to remember how he lost his father and got into the funeral business to begin with. However, she also leaves behind a son, never close to her in life, who wishes to give her a more expensive casket than her pre-meet’s choice and is jealous of Rico. Nate and Brenda attend her parents’ remarriage, he goes to cheer up Aaron Buchbinder, and Keith, David, and Taylor are visited by a social worker. Nikoai responds …

A piece of “blue ice” broken off an airplane strikes Anahid Havanessian, whose husband goes to Fisher & Diaz for a funeral…but changes his mind when, frustrated with the government for hiding that such deaths are common and suspecting Nate’s silence is indifference, he’s snapped at by Nate, who then snaps at David and Rico for telling him he lost them money by not demanding payment for the meeting when they “switched to the local chapel”. Walking in the early hours of the morning to clear his head without success, and drinking heavily and sleeping with a bar …

Aaron Buchbinder passes away painfully shortly after Nate arrives to visit (after he argues with Ruth about her visiting and photographing his daughter Maya). Kroehner’s last act against the Fisher & Sons funeral home is to hire an inspector to examine the place, and they’re fined for the problematic drainage system. Nate has a bleed requiring a cranial surgery to cure. Vanessa encourages Rico to ask for permission to be a partner since he has the money to pay the fine, and he’s given 25% of it only when Nate reminds David he may need a replacement for Nate. Ruth …

Nate and Brenda’s daughter Willa is born, but 2 months early and at only 2 lb. 4 oz., requiring a prolonged hospital stay. Nate is convinced she won’t make it and insists that he can’t accept it if she does and is “damaged”, shaking Brenda’s own confidence. Rico encourages David to sell the funeral home but instead he and Keith buy out Rico’s 25% so he can start his own. David agrees to temporarily leave home, and goes to the funeral home. There he’s confronted by Nathaniel about considering leaving the business and for his gayness, and is forced to fight his …

Convience-store owner Dorothy Kim Su is fatally shot during a robbery. Nate is forced to file a missing-person report when he continues to hear nothing from Lisa. Construction-worker Edward Tully hits some electrical wires in the site where he’s working during an earthquake, is electrocuted, and falls to his death. Nate calls David, where he’s sleeping with Patrick, and tells him he’s starting to panic, especially after the earthquake. Ruth has convinced herself, as usual, that everything, including Lisa, is fine, but doesn’t convince Claire, who is set to believe …

Lawrence Hall Matheson chooses the wrong moment to check his pulse while jogging in a California “ecotone” – a cougar mauls him. Hospitalized following his seizure, an unconscious Nate dreams he returns home after he simply woke his asleep arm up and requested a divorce, while in reality Maggie struggles to answer medical questions and contact the family. David arrives only to learn that Anthony is terrified to be in a hospital, and Claire is accompanied the whole time by Ted, so she respects him despite the fact that he’s Republican. The doctor, unfamiliar with Nate …

Best Episodes Of The Thick of It