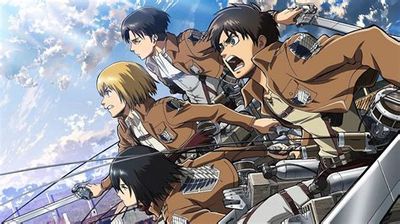 10. The Other Side of the Wall

The ceremony to honor the fallen soldiers has begun, and Eren discovers the truth behind his father’s motive to kill the Reiss family. One year later, the Scouts begin their expedition beyond the wall to reach the boundary of their world.

Following the battle, the Scouts regroup atop the wall only to find more questions than answers. Before they leave for Trost to get medical attention, Reiner must fulfill what he came to do.

Eren encounters the very Titan that devoured his mother. Unable to move his body, Hannes steps in to protect him. Not knowing what to brandish their swords against, the Scouts battle on.

As battle breaks out to prevent the ritual, Historia makes a shocking decision which leads to catastrophe.

While the recruits attempt to reason with Bertholdt, Commander Erwin charges forth in a desperate strategy to topple the Armored Titan.

As the battle for Shiganshina draws to a close, Eren meets a mysterious figure, and a fierce conflict breaks out within the remaining Scouts over who is to receive the injection and be revived.

4. Iron Hammer: The 57th Expedition Beyond the Walls, Part 5

Managing to get out of Erwin’s trap, the Female Titan transforms once more and chases after Levi’s squad, who fight back in a deadly clash.

Though their Thunder Spears prove effective, the Scouts’ celebration is short-lived as disaster descends upon Shiganshina.

Eren confronts Reiner, while Willy Tybur gives a speech to the entire world in which he aims to solve the endless cycle of hate directed towards Eldians.

As the battle between Eren and the warriors rages on, another party makes their move on Marley’s Forces that pushes the tide of the battle into a more devastating climax.