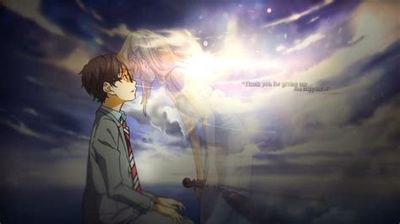 It’s Kousei’s turn to take the stage, and everyone is waiting to see whether or not he will be able to play. How will he be able to perform with the memories of his mother still floating in his mind?

Kousei asks Nagi to let him perform at the Kurumigaoka Junior High culture festival. He wants to reach Kaori through his music. With that in mind, he and Nagi take the stage, and their performance begins. But unlike during practice, Kousei, the supporting player, in a complete switch of gears, begins playing at an incredible pace, filling the music with an aching atmosphere, pressuring Nagi. And Nagi, unwilling to give in to Kousei, tries to hold her own.

Takeshi Aiza and Emi Igawa. These two have a strong rivalry with Kousei. But what drives them to play piano?

Kousai being Kaori’s accompanist appears to be a bad idea.

Kaori has been hospitalized since the day before gala concert. Kousei went to see Kaori in the hospital with Tsubaki and Ryota. He gets a bad feeling because she reminds him of his mother. Meanwhile, Tsubaki has to face her mind honestly.

5. The Scenery I Shared with You

Kousei’s performance begins. He starts off on a roll, but then midway through, his playing begins to fall apart. Hearing this uneven performance, the audience starts to buzz. Are the rumors that Kousei can no longer hear the sound of his own playing true? In their hearts, Kaori, Tsubaki, and Watari cheer Kousei on from the audience, while Emi and Takeshi, who’ve just finished performing, look on with concern. Onstage and alone, Kousei confronts his own trauma regarding his mother.

Kousei realizes that he’s onstage now because of the people in his life – the same people who support him. Playing the notes that they all gave him, Kousei pours his entire soul into his performance, so that it will reach Kaori.

The shock of seeing Kaori’s condition suddenly take a turn for the worse causes Kousei to once again turn away from the piano. “Music takes away everyone I care about…” His past trauma flashing through his mind, Kousei finds himself all alone again.

Tsubaki told Kousei that he loves Kaori, and along with that, she confessed her love. Kousei became conscious who he loves. When Kousei visits the hospital with Ryota, they watch an unexpected scene.

It’s the day of the gala concert, and it’s time for them to go on, but as Kaori is a no-show, Kousei takes the stage alone. The venue is abuzz over the strange situation of the accompanist, Kousei, showing up onstage by himself. And so Kousei starts playing the song his late mother loved, Kreisler’s Love’s Sorrow.

Best Episodes Of Horace and Pete